One of Our Submarines Serpents is Missing*

So, the hyped local story concerns an adolescent cobra which has gone Galt. This serpent has broken free from the collectivist snakes which are feeding off the largesse of the more-or-less hairless apes which keep them enslaved.

I don't agree with the Wildlife Conservation Society's decision to close the Reptile House (one of my favorite places on the planet, I must say). I think the WCS should allow thrill-seekers and religious kooks to tour the Reptile House after signing waivers and paying a premium fee. Maybe they could raise revenue by charging despondent monarchs a hefty sum to walk barefoot in the House of Reptiles.

Uh, it just hit me... the missing cobra may be on a pilgrimage to Elizabeth Taylor's graveside. If this is so, the cobra wouldn't be the first venomous creature to show up at the memorial.

*A personal favorite of yours truly... for a more irreverent treatment of a similar subject, there's always, uh, this...

POSTSCRIPT: I am of such an age that Liz Taylor was largely a punch line in my childhood years, and an activist in my maturity, so it's easy to forget that she was quite the sex bomb at the height of her powers: 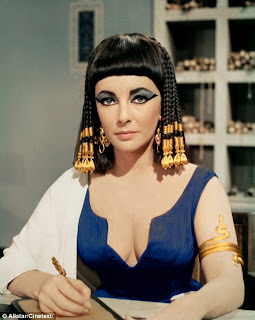 POSTSCRIPT TO THE POSTSCRIPT: When "Sex Bomb" was released, I was on vacation in Amsterdam, and a naive tourist could have been convinced that the song was the national anthem of the Netherlands rather easily.

I am so with you. Magic of the cobra markets, and such asp.
~

Also, I hope this guy is nowhere near the reptile house...

Nothing beats a good snake sherry...

Just FYI, I've had it with Samuel L. Jackson too.

I like "Apples and snakes have gone together since the beginning."

B^4, for a long time I only knew that she was a famous lady with big hair who did a weird perfume commercial. (I swear, I fucking saw that thing playing just a year ago).

She was the shiz.

(I swear, I fucking saw that thing playing just a year ago).

Every Xmas & other "perfume for m'lady" holiday occasion.