I call it a cutant: 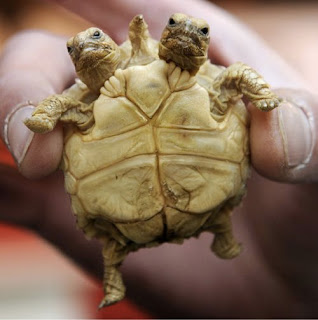 This picture was "Picture of the Week" in the Telegraph (Torygraph?). Anyway, this beautiful mutant, named Magdalena, should grow up to the perfect girlfriend for this guy, because, after all, even a mutant girlfriend is better than a blow-up one.

Speaking of blow-up girlfriends, am I the only one to be weirded out that there were two songs about... er... inflatable paracoitae released at roughly the same time in the U.K.? Am I also the only one weirded out by the fact that I have both of these songs on my portable music thingamadoobob?

Playing all three youtubes at once. (Admittedly, one doesn't add much to the audio mix, but it more than makes up for it with the video.)
~

First of all "cutant" is really, well, cute and funny. And that little creature certainly is one.

That we know of.

Just as long as you don't have an inflatable thingamadoobob...
Interests? Website? Newsletter?

Wait. What if this turtle is a ninja? Think about it...


I'm sure Jobs is working on it.

I'm sure Jobs is working on it.

been there done that

Sure it's cute now. Wait until it grows up and becomes my boss.