Never Wished to Live in Buffalo Before

I've been to Buffalo, I've even had a good time in Buffalo (though hot-footing it to LEAFS SUCK!!! pronto was definitely on the Buffalo Road Trip agenda), but I've never had Buffalo-envy until now. In fact, I've known a lot of ex-Buffaloans (including a late, lamented boss) and they were nostalgic about the place, even though they had no intentions of ever returning... So, why am I envious of Buffalo residents? Because they have a chance to vote for this guy:

Yeah, Ian Murphy of cold-calling Koch fame has thrown his hat into the political ring, running for the seat abandoned by Chris "Craigslist" Lee. It's funny, while I figured that Chris Lee's immediate resignation after his attempted Craigslist dalliance was due to the possibility of more kinky revelations, I had no idea that these peccadilloes came out into the open. Damn, are any of the patriarchal homophobes in Congress not into kink? I had no idea that these revelations were made until today. Thanks again, Mr. Murphy!

The crazy thing about Mr. Murphy's campaign is that he actually has a shot- it's a five-way race, and the other candidates range from the center-right to the ultra far-right. Also, check out his front-page header, this is a guy who is aware of all internet traditions: 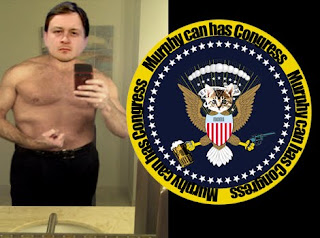 I also want to take a moment to apologize to my beloved Midwestern readers for yesterday's rant. Hell, New York's Democratic governor is governing GOPlight style. Hell, how could any of us have expected sound judgment from a guy who's cohabiting with this woman?

But he's being Republican in a friendly Democratic manner!

We're all living in the United States of Dumbfuckistan these days.

I blame the squirrels.
~

I blame the squirrels.

The Kwanzaa cake nuts lured them into the plot.

's cool. Be thankful you don't have to live among these dumbshits.

That "Kwanzaa" cake still flummoxes me every time I see it. Not even a stoner would think to put that shit together.

Hunger Tallest Palin (or whatever handle I posted under the last time) said...

Can I say Cold Koched?

I would totally vote for that guy, too. I wish there were some backdoor, ACORN-y, abortiony way to do so. Maybe all 2 of the New Black Panthers can help me find a way.

Speaking of LEAFS SUCK, they won last night! We are now tied for being the best team to miss the playoffs (although Carolina does have two games in hand)!

If I compete, I will keep your young friend in mind.