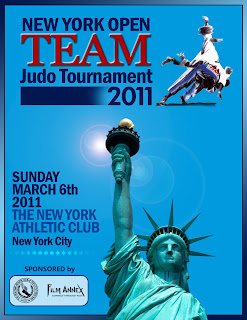 In a departure from previous NY Open Tournaments, this year's open featured only four teams, the U.S., Canada, Italy, and Germany. Each team featured five judoka, so the many hours of preliminary matches were unneccesary. This event was pretty much "all finals, all day". Also, there was only one mat, which improved the viewing experience (previous "Opens" had two competitions running simultaneously, which often led to frustration when spectators watching one match were surprised by a call of "Ippon!" from the other mat). Yeah, the one mat format was an improvement over the two-mat tradition. Additionally, moving the mats out of the gymnasium after the tournament was a lot less time-consuming. In an even greater departure from previous events, this year's Open, helmed by mad genius and Friend of the Bastard Francesco Rulli, had a hipper vibe- more nightclub than school gym. The lights were dimmed in the room, throwing the competition area into greater prominence. There was a busy beer concession, and about forty up-and-coming fashion models were in attendence. A D.J. was playing tracks between matches, and a recording of Japanese drumming was sometimes used to heighten the tension of the matches themselves. All told, the event had a more modern, more European vibe than previous Opens. Color commentary was provided by five time national champion Carrie Chandler.

I spent some quality time watching serious competition while drinking beer with good friends, all the while contemplating this hipper new incarnation of the Open Tournament. While the afternoon was a spectacular success, I did miss the more international flavor of previous years, when teams from Brazil, Mongolia, Poland, Haiti, Japan, South Korea, and several former Soviet republics were in attendence. Hopefully, next year's Open will feature more teams, while keeping the one mat format, and the "hipper", more modern vibe. Kudos to Francesco for masterminding an event which will most likely form the template for future competitions.

Also in attendence at the Open was film industry gadfly Abel Ferrara. I was able to speak with him briefly about the beauty of our weapons of the sport. Unfortunately, I didn't have time to pitch my idea for a musical based on The Bad Lieutenant- sample Just Two Girls from Jersey:

Uh, I digress... back to the tournament- the German team won the gold, with the U.S. taking silver, and Canuckistan taking the bronze. For a taste of the action, here is video of a great match (though a bit of a hearbreaker, as local favorite Garry St Leger was thrown for "Ippon" by German player Rene Kirsten):

The technique used was uchimata, which means "inner thigh". Uchimata belongs to the family of hip throws- here's a nice breakdown of the throw, which looks a hell of a lot worse than it actually is.

The first time I ever enjoyed Sapporo and Sushi was here, after a karate belt competition.

Edit: (I'm not sure here exists anymore, it was downtown near one of the World Trade Center buildings.)

If you ever get the chance, go here and tell 'em I said hi.
~

Um, OUCH. I'm sorry, but what I just saw looks really really painful. I'm fascinated by how much more Judo looks like wrestling to me more than I what I typically think of as the martial arts.

I'm fascinated by how much more Judo looks like wrestling to me more than I what I typically think of as the martial arts.

It pretty much is one form of traditional Japanese wrestling. Every culture seems to have a couple of wrestling styles.

Dahlink, while this particular tournament was a "swordfight", there was this item:

You know you loved it!

Wow. Sisters doin' it for themselves. Good for them!

B^4, that mustve been the voice I heard I in the clip. I was intrigued by the fact that it was a woman who obviously knew what she was talking about.