Alright, you primates, here's a blast from the past, the Cretaceous, even! Thursday night's lecture was all about the care and feeding morphology and descent of the tyrannosaurs. Stephen Brusatte of the American Museum of Natural History and Columbia University delivered a barn-burner of a lecture, one of the best in an amazing series.

The lecture began with a discussion of Tyrannosaurus rex, and an image of the iconic "Sue" of Chicago's Field Museum. Mr. Brusatte (he's working on his doctorate) listed the characteristics of T. rex, such as the huge, deep, robust skull (the nasal bones of which are fused, unlike those of most other predatory dinosaurs), and regions for the attachment of massive muscles. In the image below, the "space" in the mid-region of the skull is the antorbital fenestra, which reduces the weight of the skull. The "keyhole" shaped opening behind it is the orbit (known technically as the "eyehole"). The teeth are not blade-shaped, but are sharpened pegs, which combined with the incredible bite force, were capable of crushing bone. CT scans of the skulls of T. rex indicate that the animal had well-developed olfactory lobes, suggesting a good sense of smell. T. rex also had binocular vision- the animal had highly developed sensory organs, and wasn't the pea-brained brute of popular conception. 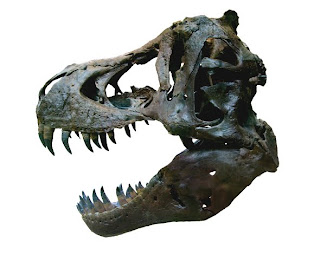 While the tyrannosaurids had long hind limbs, T. rex was almost certainly not a fast runner(sorry dinosaur/car chase fans!). Studies of tyrannosaur histology indicate rapid growth rates (as much as four pounds a day in some genera), which suggest a high metabolism.

The tyrannosaurs are a member of the coelurosaur clade, and evolved from smaller forms with proportionally smaller skulls and larger forelimbs. Primitive tyrannosaurs were extant as far back as the Jurassic Period Another relatively primitive genus Dryptosaurus (formerly Laelaps) had large forelimbs for a tyrannosaur (make sure you check out the painting by the brilliant Charles R. Knight in the Dryptosaurus link.

A recent discovery of Raptorex, a mini-tyrannosaur with the characteristic robust skull and tiny forelimbs of it's huge relatives, demonstrates that the increase in skull size and forelimb reduction could have evolved separately from the gigantism of the late Cretaceous tyrannosaurs. The evolution of extremely large tyrannosaurs was probably a result of the decline of large theropod lineages. Another recently discovered tyrannosaur, Dilong paradoxus exhibited evidence of feathers. Another recently discovered tyrannosaur, Alioramus altai, while closely related to late Cretaceous forms, had a lower, longer skull... oh, hell, I'll let the guy who described it tell you about it. Take my word for it, he's a guy you'd want to have a beer with.

I've been rambling on for a bit, so I'll pick up the pace...

In the Q&A session, the issue of feathers was raised- since feathers evolved before flight, their primary purpose was probably either insulation or display. Some bastard asked if the large theropods of the southern continent of Gondwana showed evidence of the sensory sophistication of the tyrannosaurs. While their skulls haven't been studied in as much detail, they probably weren't as sophisticated in this regard as the tyrants. The tyrannosaurs were limited in range to the Laurasian (Northern Hemisphere continent. The issue of dinosaur sex came up, but the mechanics of Mesozoic lovin' are still a mystery, so throw Rule 34 to the wind, and do an image search (good luck!). Paleontologist Mary Schweitzer has figured out a means to determine if a dinosaur is an ovulating female by seeking out a particular bone type peculiar to ovulating female birds.

To get away from the tyrannosaurs, the tyrants weren't the only dinosaurs to have drastically, almost comically, reduced forelimbs. Carnotaurus was mentioned briefly, but the crowd just wasn't that into it.

All told, the lecture was an amazing one. I was also privileged to ride the subway to Union Square in the company of Stephen Brusatte, who is an all-around great guy.

Posted by Big Bad Bald Bastard at 2:58 AM

You what FREAKS ME OUT about T-Rex? That they have feathers when they're juveniles. For some reason when I found out about that, it sort of ruined T-Rex for me awhile. For some reason it didn't seem right.

While the tyrannosaurids had long hind limbs, T. rex was almost certainly not a fast runner(sorry dinosaur/car chase fans!).

I am sorry! When I was little, the slow, tail-dragger model was the only one I was aware of.

Car-chase T. Rex was a revolution!
~

They were just experimenting. Nothing wrong with that.

Damn juvie T-rex with their feathers and their...rock 'n' roll. Devil music is what I call it.

Why don't you quote a real source of info instead of those laughable lies?

fish used to ride a dinosaur to bible study.
~

I am sorry! When I was little, the slow, tail-dragger model was the only one I was aware of.

The Charles R. Knight painting of the leaping dryptosaurs dates back to the early years of dinomania- the evidence was out there, but anti-reptile prejudice (mammalism!) cause many to overlook it.

Why don't you quote a real source of info instead of those laughable lies?

Be careful- Roy Comfort may show you his banana!

They were just experimenting. Nothing wrong with that.

There's a court order preventing me from wearing a bikini.