We Need to Talk About Andrew

I've been on the record stating that Andrew Cuomo really wasn't my first choice in his primary races, being way too centrist, and an opportunist to boot.  Still, it's a bit jarring to see the barrage of sexual misconduct accusations that have been leveled against him this week... and I really can't address the issue better than this post at LGM.  I mean, 'the picture' is problematic: 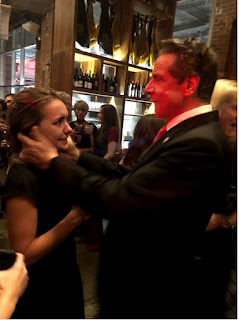 The optics are bad... a young woman grimacing as the older governor touches her while sizing her up as if she were one of the prosciutti hanging in the background.  If you told me that it was a picture of a kindly uncle consoling an upset niece at her father's funeral, it wouldn't seem so bad, but that's a wedding picture.  Of course, the other allegations, involving inappropriate conduct toward subordinates, is worse.

I believe that these allegations against Cuomo should be investigated, and Leticia James, our Attorney General, is the perfect person to do so- she's smart, and no-nonsense, and won't let partisan politics blind her.  Speaking of partisan politics, Lindsey Graham has been particularly gross, suggesting that Democrats 'follow the Republican model' when dealing with Cuomo.  If I were a prominent Democrat, I'd make a deal- we'll get rid of Cuomo as soon as the Republicans get rid of Trump, Jim Jordan, Madison Cawthorn... need I go on?

The other big Cuomo scandal to come to light involves downplaying nursing home deaths due to COVID-19.  In the early days of the pandemic, hospitals released recovering COVID patients to nursing homes before they were completely cured, a procedure which was blamed for the horrific death tolls in nursing homes.  It was a bad decision, made at a time when there were no good decisions- the hospitals were filled to capacity, and nursing homes have the wherewithal to provide for a level of care necessary, but not as intensive as ICU care.  It was a Catch-22 situation.  I used to work in a nursing home from time to time, and I know how terrible conditions can be during outbreaks (I worked during a norovirus outbreak which ended with entire floors being quarantined), but there was no better alternative for these early patients.  That being said, the coverup was really bad, and unnecessary- we need authorities who tell us the truth, especially during crises.

If Cuomo gets bounced, I certainly won't shed a tear for the guy.  Lieutenant governor Hochul, an upstate conservative Democrat, is no prize pig, but if Cuomo is found to be a serial harasser, I will support her ascent.  Going forward, though, I think I'm only going to vote for women in the foreseeable future, and non-nepotism hires going forward.  Enough with toxic males in power.