Four Years Ago, It Was Just Another Race Cult

I'm getting serious Esoteric Order of Dagon vibes from that thumbnail picture: 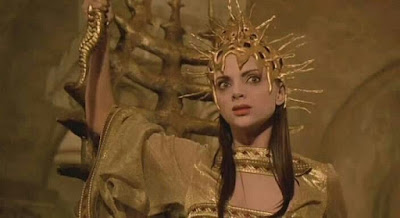 I guess that's appropriate when your boyfriend has the Assmouth Look. Poking around the t00bz, I discovered I wasn't the only person to note that Guilfoyle looked like something out of a cheesy fantasy movie:

I also got a snake handler vibe from her, maybe because she positioned her hands like a Minoan Snake Goddess for much of the speech.   I'm not good with the photoshop skills, but I imagine some wag will notice the likeness.

Post title take from one of my favorite lines of dialogue: "Two, three years ago, it was just another snake cult... now they're everywhere."

Tonight is a combination bar trivia/Secret Science Club Zoom lecture night, so I sha'n't be watching the atrocity... better to build my brain up rather than rot it with GOP lunacy.