Some years ago, I posted about a magnificent black cat which sometimes hangs out at my principal workplace. His status was pretty ambiguous, he was un-neutered and bore no collar of any sort, but his glossy pelt and overall healthy, well-fed condition suggested that he was not a stray. He shows up from time-to-time onsite, but yesterday he was hanging out outside of our visitors' center, receiving adulation from an adoring public, including myself: 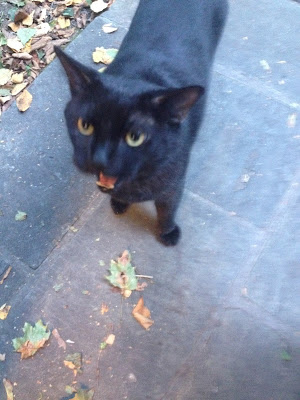 He's even more well-fed than before, has been altered, bears some flecks of gray in his beautiful coat, and bears a flea-collar, but no identification tags of any sort. He is even friendlier than he previously was: 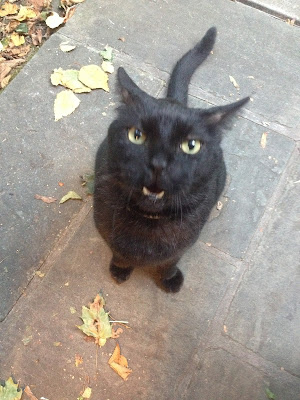 I still have no idea if he belongs to any particular neighbor, or if he's just the recipient of care from the neighborhood. Apparently, there is a local woman who cares for feral cats in the neighborhood. If his status were less ambiguous, I have no doubt that we'd grab him and put him on the payroll

That is a great idea!

Communicate with the neighbourhood with Catmail.