Check out this bunch of handsome young fellows, looking for all the world like the world's toughest boy band: 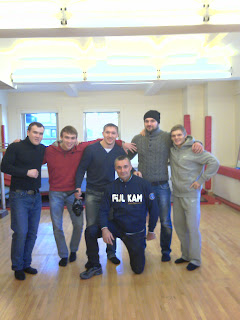 Sorry, pop fans, these boys aren't crooners, the standing fellows are a team of Russian university students here in NYC for tomorrow's NY Open Judo Tournament. I met these guys in the lobby of the storied New York Athletic Club and got them in touch with the guy who's "taking a knee", a guy who is, GASP, not a Russian. That dashing chap is my great and good friend Francesco Rulli, the proprietor of Film Annex and a tournament sponsor. Whenever Francesco meets someone, he always takes a "headshot"- my profile picture was taken by Signor Rulli a few years ago. Needless to say, he made sure to take headshots of all the Russian guys and joked about selling them off to some "cougars".

The guy in the gray hoodie seemed to be their leader, though the nice guy in the red fleece bore the dictionary/phrase book and had the best command of English (albeit not so great, though my Russian is limited to a handful of phrases). After their introductions to a couple of tournament officials, they decided to take a few hours for sightseeing before their weigh-ins. I gave them directions to the Empire State Building and bid them "До свидания!" before heading off to work. They'll have a great time, they're a bunch of twenty year old university students in New York City for five days.

I have to say, for all of the language barrier, these guys came across as a really nice bunch. I'm not so afraid of the Russians:

If you're in the NY metro area, and you want to see these guys compete, the New York Open Judo Tournament is open to the public. I'm going to check it out for a couple of hours before going off to work.

I find it odd that American geopolitical "adversaries" are inevitably the most interesting and enjoyable people culturally and, even more bizarre, the most like us in the important ways.

Persians are frequently vain and love to party all night (like Americans) but are almost frighteningly loyal, and will always be the first ones there if you put out a call. Vietnamese are JUST LIKE us - constantly being funny, irreverent, satirical and snarky. Laughing their asses off at everyone including themselves. Very long fuses but you don't want to push them past their limit. Russians are just plain folks. They always remind me of Americans from the Rural south, tough, self-reliant, fearless. They are more likely to be laughing than crying, and are always ready for a road trip or an adventure.

On the other hand, don't get me started on the Bloody Belgians...

A friend of mine went to Iran with a wrestling team and had a great time there- there were things they knew they couldn't do, but all of the guys were welcomed hospitably.

I like Vietnamese people, any people who can make a kickass bowl of pho are alright in my book. There aren't too many of them in my neck of the woods, though- the first Vietnamese restaurant in the county opened up about three weeks ago. You know they have my business.

I've met quite a few individuals from Russia and the former republics (a lot of Uzbeks play judo), good guys all.

On the other hand, don't get me started on the Bloody Belgians...

Hey, now! I played judo with a couple of Belgian guys while in college, and they were really superb individuals. Nice guys, big beer drinkers, all round good people.

Send the russkies here http://www.dubpies.com/ that'll sort them out

Send the russkies here http://www.dubpies.com/ that'll sort them out

They might be fooled by all those Pavlovas, they sound kinda Russian.

Dub Pies is awesome... it's been a while since I've stopped by their store, which is near Prospect Park. My friend Handsome Johnny C. lives near there. He's an Irishman, but I'm sure he'd be down for an Antipodean pie.

A movie I remember from me elementary school days:

Emergency! Everybody to get from street!
~

With all the money he receives from Dub Pies for the advertising, I expect Another Kiwi to splash out large on a packet of Tim-Tams.
See, spammers, that is how you do it.

A movie I remember from me elementary school days:

That is an awesome movie- it used to be shown on the TeeBee masheen every once in a while when I was wee.

With all the money he receives from Dub Pies for the advertising, I expect Another Kiwi to splash out large on a packet of Tim-Tams.
See, spammers, that is how you do it.

It's still shown on the teevee, Big.

I doubt anybody gets it, though.