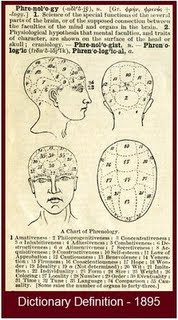 A short while ago, a local nonprofit had a fundraising event which featured several entertainers- including an interpreter from Old Bethpage Village who does a phrenology schtick. Of course, the phrenologist could not resist the quick study that my glabrous pate presented, so I was the recipient of a public "reading" of my "classic head".

Now, I would not be so naif as to give any credence to 19th Century quackery, but my reading was creepily accurate:

Starting at my occiput, he informed me that my philoprogenitive groove indicated that I had a tendency to nurture children and small animals.

Proceeding forward along my pate, he stated that I tended to be skeptical of authority, but that my respect could be earned with demonstrated competence.

As far as memory was concerned, he told me that my short-term memory (no cannabis jokes, now!) was not great, because I had a lot of irons in the fire, but that my long-term memory was extremely good. "You have the ability to remember conversations that you had twenty years ago with startling accuracy."

Finally, proceeding to the front of my melon, he told me that I had a "bump of benevolence", and was generally of good disposition, and generous character. Well, that's a most flattering view of me, and one that I would have to have corroborated by a disinterested third party, but one I would not dispute.

So, what the hell does one do when one's view of oneself is corroborated by pseudoscientific whackaloonery? Well, obviously one chalks the success of the quack up to lucky guesswork or keen observation, but rest assured, I would never view my phrenological "reading" as anything more than a harmless schtick performed by a gentleman who is usually occupied in more serious endeavors with an educational nonprofit.

All the serious phrenologists are working for the Grays these days. Bigger skulls and all that. More scope for their talents.

No-one could have predicted that hyper-intelligent aliens could be so credulous, but it turns out that they're visiting Earth mainly to read our astrology columns.

I hope you won't be offended if this comment becomes recycled as a blog post some time.

All the serious phrenologists are working for the Grays these days. Bigger skulls and all that. More scope for their talents.

The "queers" are working with the Grays, at least according to a pamphlet I got from Pueblo, Colorado.

Somewhere, I have an old analog piccy of my dear wife in that mechanical phrenological nightmare.... have to see if I can dig it out and fire up the fricking scanner.

Jeez, how did we live without everything being digital?