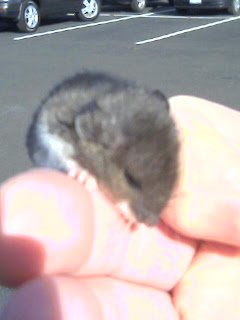 Here's a tip of the hat to "Another Kiwi" of Riddled, who posted a link to a Temple University study of the effects of booze and caffeine on mice made to run a maze.

I suspect that this little critter was caught by one of the local cats, and was in shock, so I picked it up, gave it a wee nip of courage, and placed it by a nearby fieldstone wall, whereupon it scampered off. I have two friends who told me I was nuts for picking it up, both saying "Aren't you worried about rabies?" Rabies? Nah... it's the hantavirus that should have dissuaded me from picking it up.

Interesting story, and I respect your respect for the wee creatures, BBBB.

In my experience, mousies and even much larger critters (ratzies) don't ever get up (much) after feline depression.

What kind of booze did you use?
~

What kind of booze did you use?

A wee dram of "Poetic License".

After I picked the critter up, it clung to my finger for dear life, while I wondered what the hell to do with it (at one point, remembering the movie Never Cry Wolf, I contemplated eating it, but I lacked fire-starting implements... After a short spell, it seemed to recover, so I set it by a nearby fieldstone wall, whereupon it skeedaddled.

It may have been ZOMBIE MOUSE and was nomming your finger in the hope of branes.