I was disheartened to read of the death of Dame Diana Rigg, star of stage and screen, author/editor, and raconteuse.  Like most males born in the late 20th century, and beyond, I am most familiar with her work in campy 1960s espionage romp The Avengers where her iconic 'Emma Peel' combined a gaminesque prettiness with perfect comic timing and the lethality of a wuxia protagonist.  This ensured her status as an international icon... I can't even begin to imagine how many fetishes this one scene embodies:

If it ticks off any boxes for you, please note it in the comments. 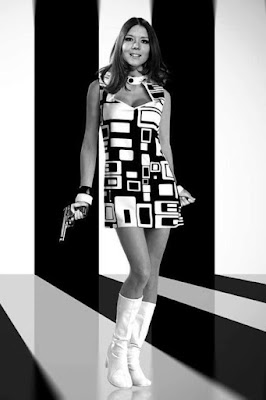 As Emma Peel, she formed a bridge between real-life heroines such as Edith Garrud and Miss May Whitley, and the now-ubiquitous Action Girls such as Lara Croft, Okoye, and Black Widow.

It was criminal that someone so central to the success of the show was underpaid, earning less than a cameraman.

Sure, that's pure fanservice, but what's wrong with being sexy? At any rate, Diana Rigg's career was both groundbreaking and far-ranging. She played the ingenue, the action girl, the tragic heroine, the villainess, the dowager in a career spanning seven decades. As far as icons go, I can think of few more influential ones, if any.

This just popped into my head... there are few problems that can't be solved with a well-placed kick and an arch smile.

[psst, check the para that starts "I have to confess"]

I can't remember actually seeing Dame Diana Rigg in anything at all, but her position in British culture is such that you can't avoid knowing about her if you spend any lengthy time in the UK.

82 is a decent age, but a death from cancer is always to be regretted. Her wonderful, talented and eerily lookalike daughter, Rachel Stirling, is bereft, but the Rigg magic is safe in her hands as she bewitches a much younger generation.

George Lazenby, whom Rigg apparently loathed, greeted her death with a tweet that, true to multiple stories about his overweening ego, made it about him:

"She undoubtedly raised my acting game when we made On Her Majesty’s Secret Service together in 1968-9."

Which is an insult the great dame surely didn't deserve! (I apologise to her ghost for my sod of a countryman.)

Vale Diana. Not many women get to be so beloved in this world, or for so long. My sympathies to her family.

Thanks, that's what I get when I jump between compose and html modes to properly embed images and videos. This new interface is garbage.