I've spent the better part of a month working at one of the satellite sites on my job, rather than my usual haunts. Longtime readers will have noticed that there's been a lack of spice on the blog... a lack of Ginger, in particular. I'm here to remedy that by putting up a photo of mah preshus Ginger, who I've been spoiling all day: 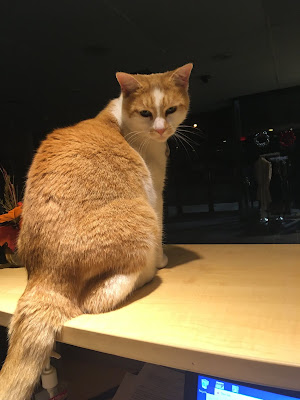 Even though we are officially closed for the season, the gift shop in our visitors' center is open on weekends until December. It's pretty low-key all told, but there was a steady flow of foot traffic all day.. I brought Ginger into the shop with me this afternoon after feeding her in her usual domain, and she hammed it up for the people who stopped by. She's a diva, after all, and the visitors showed her the love that all divas are due.

She's truly diva -esque in proportion too! Yes, I know, it's all winter fluff.

I was happy to spend a couple of hours goofing off with her over the course of a night, Ali.

It's not all winter fluff, L'il, she's a very muscular cat, with some chunk on her from her friendship with the ice cream vendor who works our events. I refer to her as our little bear cub.