I figured I needed a break from political content, and I had a fortuitous encounter which gave me some material to work with. While walking across a meadow adjacent to one of our on-site parking lots, I caught a glimpse of a rapid movement on the ground out of the corner of my eye. An inspection of the area revealed this handsome critter: 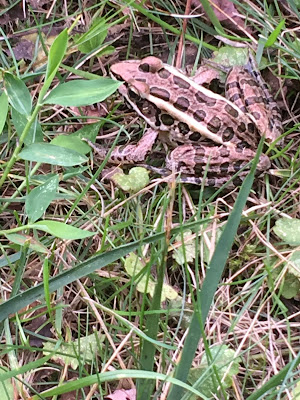 My typical rule of thumb is that the best way to learn exactly what you're looking at is to know generally what you are looking at. I'm a pretty good judge of local amphibians, and the question that I faced was is this a species of leopard frog or is it a pickerel frog? Both are in the genus Lithobates, but that encompasses all North American 'true frogs', including this chunky guy. I'm leaning toward identifying it as a pickerel frog (Lithobates palustris), given the shape and configuration of its back spots (leopard frogs tend to have some random spots, and rounder spots. I totally muffed the 100% identification, because I didn't flip the frog over to check out the color of its thighs and groin. Hey, I had just undergone a training session a couple of days ago, so I can't be going around checking out the groin of a co-worker who's in the Groundskeeping Department, Insect Control Division. The other way I could have determined which of the two frog types it was would have been to lick it, but that wouldn't even have resulted in a high, so I took a pass.

Not being at all conversant with frog identification points, but having looked at the linked pix and having once gone thru a frog-conscious phase due to an illustration I was working on, I think you're right about it's being a pickerel frog. Very handsome. And I applaud your sensitivity to the privacy of a fellow worker.

Thanks! I try to do my best for my critter co-workers.