It's been a long day- I was up at 7:15AM, and busted out the old jacket and tie for the holiday party at my volunteer gig: 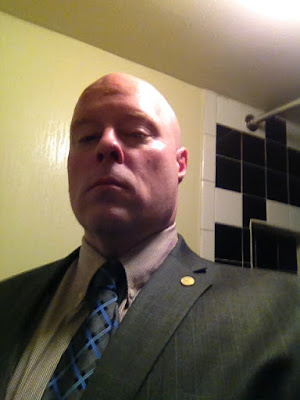 After teaching class, we all assembled for a luncheon- kids, coaches, counselors, parents, plus a few guests. We had an amazing guest speaker, a young man who has a rare form of vision impairment who went on to become a champion Parathlete, competing in swimming events. He got to know our athletic director, a sports doctor, because of an in-pool collision which resulted in a concussion. I really was impressed by this young man, and I'm not easily impressed.

That being said, I was also impressed by our young counselors- one of them took it upon herself to organize a toy drive for Ronald McDonald House, which houses the families of ill children facing medical treatment. The organizer has always been one of my favorite kids in the program, and I have known her for years, but now I am in awe of her. She has outstanding ethics, a cheerful personality, and is a talented athlete... I am honored to know her. Another counselor, who serves as the first among peers, gave an amazing speech regarding the things she has learned while acting in a position of authority and responsibility. She's a level-headed girl, poised and comfortable in her position. Again, I consider myself fortunate to have such a teenager helping us out to deal with our younger charges... you are only as good as the people in your corner. As an added treat, one of our soccer coaches played her guitar and led us in the singing of some holiday music, and her nine year-old daughter joined her on piano for a song she had spent a lot of time practicing.

After lunch, I quickly hopped on the subway back to the Bronx, drove back to Yonkers for just long enough to change into work clothes and drop off my bulky gym bag. I then hit the road to get to the job, where a low-key fundraiser was going on. My first order of business was feeding the cat, then I settled in to deal with the public for a couple of hours. We had a nice group of attendees, the sort of people that listen to NPR.

I'm pretty beat now, but my relief comes in in a half-hour or so. I just have to feed the cat again, then I can drag my ass home. It's been a long slog of a day, but it was absolutely lovely- just the sort of day which makes feeling knackered worthwhile.