Gonna Be a Busy Night, Post a Cat Picture!

I knew it was going to be one of those days before the workday even began. At 5PM, I received a call from one of my co-workers... every single zone in one of our alarm subsystems was 'in check'- something was radically wrong with the system. I sent a quick text message to my supervisor, informing him of the situation, and sent another to my subordinate, telling him I would be coming to work an hour early to help him troubleshoot, with the assistance of the monitoring company. We called the central office of the alarm company and one of their technicians walked us through a manual reset process... to no avail. Because we were unable to reset the system on-site, they will need to send a technician on a service call. Nineteen separate alarm 'zones' are malfunctioning, so this is a pretty big deal. I called my supervisor to inform him of this development so he can make the service call tomorrow during office hours. Now, I pretty much have to camp out in one of the buildings that is not 'on alarm', and I don't believe the site WiFi functions at this location. Not anticipating being able to set up links or do any research, I will fall back on the old gambit of posting a picture of mah preshus Ginger: 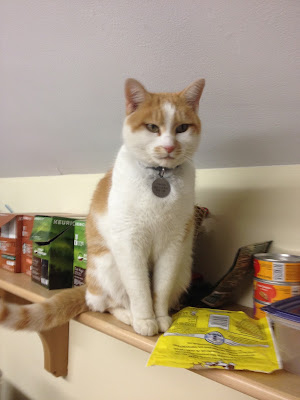 Isn't she a lovely beast?

Wee sleekit, fuzzy, imperious beastie,
what deepest thoughts in th' feline breast be?
The eye that falls on mouse or sparrow
t'were keener than any hunter's arrow!
I would raise my hand to gently pet thee,
would it not thee harrow!

The internet, it is my weening,
despite th' strife and ilka keening,
hath exchanges much demeaning--
but then there's felines!
Meme'd and shared their
small beings
are digitally divine.

We art blest, on the Internet to see
a kit so artless, deft and wee
that Och! the difference to me
is recompense
for all the other content without
much gentle sense!