A Change of Lifestyle

A couple of days ago, while working in the wee hours of the morning, I saw one of the local denizens which had just undergone a significant lifestyle change: 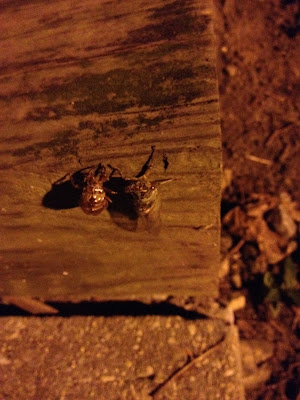 If I had to venture a guess, I'd say that this particular cicada is an annual cicada of genus Neotibicen. The local seventeen-year brood emerged a few years back. At any rate, I came upon this creature soon after it emerged from under the ground and shed its "baby skin". You can see the newly adult insect next to its exuvium. The adult cicada will trade its former life among the roots of trees to one in the crown of trees, though it will still maintain its sap-sucking habit.

Here is a picture under brighter light, highlighting the bright green mottling of the adult cicada: 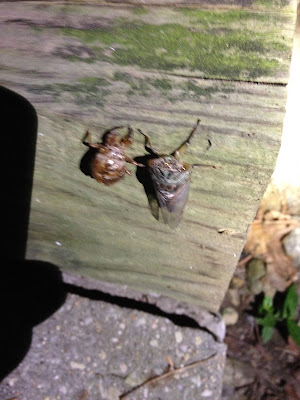 For the record, I did not eat this particular cicada, though I have eaten them in the past, on occasions which involved substantial quantities of beer. I'm not in the habit of drinking on the job.

I would like the ability to shed my earth bound skin and fly among the trees......some would believe we do.

Bugs will rule the Earth someday. Be nice to them.

Our cats in D.C. used to have a field day with the cicada hatch. Especially one of those big ones.
~