A Touch of the Macabre

Today was a beautiful sunny day- absolutely flawless, not too hot, not too cool. I decided that I would take a nice long walk, and headed south, in order to circumambulate Woodlawn Cemetery. The walk along the eastern edge of the cemetery is along a particularly deserted stretch of Webster Avenue, sandwiched between the cemetery and the Metro North Harlem Line tracks. Traffic is light, and I saw one other person along this stretch of road, a guy who was preparing to do some work on his car.

My route took me south to Gun Hill Road, away from the cemetery. I walked up Decatur Avenue (mentioned in the now-disbanded-and-mourned Black 47's Our Lady of the Bronx), where I witnessed a heated argument between two latino guys- one who seemed to have loaned his motorbike to his buddy, who proceeded to ride it at an excessive speed, messing up the works. The borrower was trying to convince the lender that it wasn't so, but the lender had the mechanical evidence. Oh, well, I hope they worked out some sort of amicable settlement of the kerfuffle.

Turning west on 211th St, I walked along the southern edge of the cemetery, and found a macabre little detail... if you're on the squeamish side, you may want to skip the photos here. I first noticed the carcass of a turtle on it's back, inside the cemetery fence: 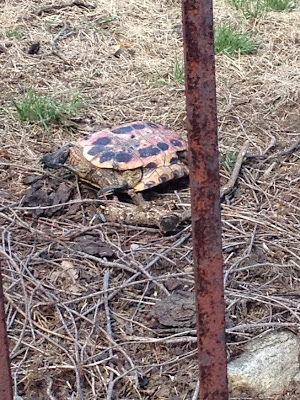 Judging from the coloration of the plastron and limbs, I'd have to guess that this hapless turtle was a red-eared slider. Poor critter!

To the right of the turtle carcass, I found the carcass of a chicken, partially obscured by a garbage bag: 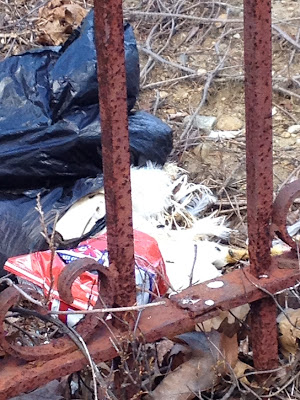 Here's a panoramic view of this grisly tableaux, encompassing the two animal carcasses: 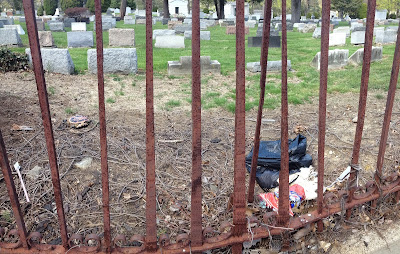 A little further down the street, I found the a chicken head which I'd venture to guess belonged to the bagged bird: 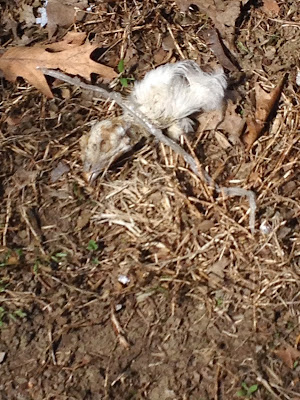 I don't practice Santeria, but I suspect that this was a case of animal sacrifice related to the religion, or one of the other syncretic religions that employ animal sacrifice- apparently, the incidence of such sacrifices is increasing.

Every once in a while, I'll encounter some weird hint of sorcery on my rambles, but this one was the most off-putting by far, so far,