Pity token congressional morlock (just look at the weirdly-shaped head on the guy!) Trey Gowdy has to be in a bit of a tizzy with the capture of BENGHAZI!!!! suspect Ahmed Abu Khattala. The Benghazi "scandal" is nothing more than a quibble over the semantics used to describe the attack on the consular office- now the Republicans look like a bunch of fools arguing over bullshit while the president was actually working quietly to capture one of the ringleaders. Soon, the president will probably have a mug made out of Khattala's cranium to match the bong he made out of Bin Laden's skull.

In his statement regarding the capture, former car thief Darryl Issa tellingly omitted giving credit for the capture to the administration and demanded that the president share information gained from the suspect:


“The arrest of Ahmed Abu Khatallah is long overdue and our military deserves credit for conducting a successful operation. There is evidence that he is one of dozens, if not hundreds of individuals, involved in the murder of four Americans in Benghazi. The Obama Administration has an obligation to share whatever information he offers with Chairman Gowdy and the Select Committee about events before and during the Benghazi attacks.”


Lindsey Graham's response was a whine about the need for the suspect to be tried at Gitmo:

With the suspected ringleader of the attack in custody, the right-wing obsession with the consular attacks should go the way of the dodo, but the wingnuts have invested too much effort in creating and maintaining the scandal, so they are now spinning conspiracy theories about the circumstances of the capture. They failed to ride the scandal to electoral victory in 2012, but they are calling for a Benghazi mulligan in the runup to the 2014 midterm elections. It remains to be see whether or not Trey Gowdy continues with his farcical Benghazi inquisition, but in the immediate future, I imagine he'll be très pouty. 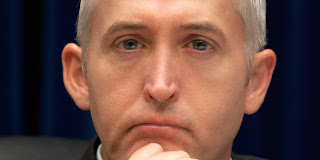 As a postscript, blogroll member Oregon Beer Snob did a perfect job of expressing Gowdy's inner qualities- I have seen no better representation of this particular congresscreep.

BBBB - I'm sorry I didn't contact yo u before coming to town. It was really a kind of impulse trip. But I shoulda called you.

I'll come back again for more research. Will contact you then.

Sen. 31 & More Yrs. As A Military Att'y. (While Senatoring? How does he do that?) still can't tell the difference between the Wehrmacht, the Viet Cong & organized gangsterism. Or wouldn't admit he could.

the way of the dodo
Worst martial-art form EVAH.

With the suspected ringleader of the attack in custody, the right-wing obsession with the consular attacks should go the way of the dodo

It's going to go the way of the Vince Foster murder.
~

They have shared some information gathered from the accused, namely that a big part of his motivation for organizing the attack was that video. The next words out of Light in his loafers Lindsey should be "Sorry Dr. Rice" but that's not likely to happen.

Thanks for the link, good sir.