Yesterday, one of my lovely co-workers told me about the Surface to Structure origami exhibit at The Cooper Union for the Advancement of Science and Art in Manhattan's East Village. I took the 4 train from the end of the line to Union Square, then transferred to the number 6 local to Astor Place, the stop being a couple of blocks from the building which was hosting the exhibit: 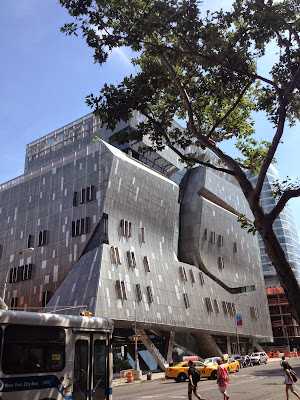 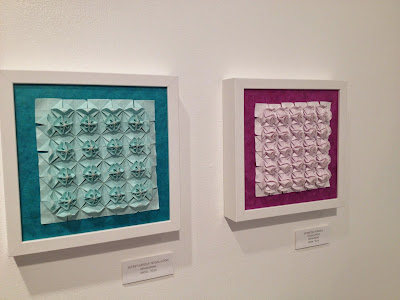 Out of the representational pieces, my favorites were two tableaux, the first being Law of Survival by Won Seon Seo, representing a chameleon stalking a grasshopper: 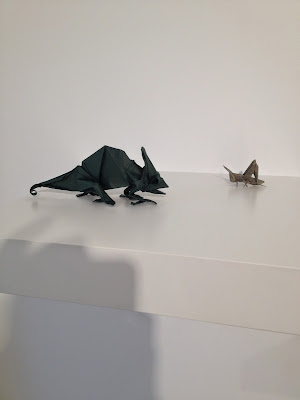 The second being a representation of a horse and a dog by Dave Brill: 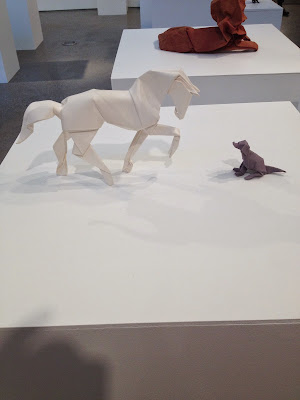 After taking in the exhibit, I walked a block to the venerable McSorley's Old Ale House, which predates the Civil War. McSorley's sells two types of beer, dark and light. It's typical to get a round of two beers per person- I always alternate between the two. Three rounds of the mugs, and I was feeling no pain- I also ordered a spartan-though-delicious lamb sandwich (medium rare on toasted rye, with no condiments and a pickle on the side- they don't want the lamb to compete with any other flavors). Fortified, but still a bit peckish, I sauntered over to the St Mark's Place location of my all-time favorite dining spot, Mamoun's Falafel Restaurant, where I had a falafel/baba ghannouj combo sandwich and a spinach pie (with a nice dollop of Mamoun's famous hot sauce). Now, that is perhaps NYC's finest meal, celebrity chefs notwithstanding.

At about 4:30, I received a call from work- the guy who was working the afternoon shift had an emergency at his other job, and the department head called to see if I could cover for him. I explained that I was in Manhattan, but could make it up to work by 6PM, an hour late. I suggested that he call one of the other guys in the department and asked him to text me his response because I'd be on the subway back to the Bronx. Luckily, my co-worker was able to cover the shift and I was able to continue my bender at The Rambling House in the Woodlawn section of the Bronx (I live a few blocks north of the Bronx-Yonkers border, but I consider my neighborhood an extension of the greater Woodlawn area (it's the "tavern district", with plenty of lively gin mills forming the backbone of the neighborhood's commercial strips). I didn't continue the bender much longer- I just had a couple of pints while watching the Germany/Algeria soccer match. I ended up heading to a friend's house after the game for a quick BBQ and a couple of more beers... it had been a while since I had had such a big beer night.

After attending the art exhibit, I was worried that the calluses on the backs of my knuckles were wearing thin...

McSorley's is a fine establishment.
~

I haven't, but it's been recommended to me.

A crass mass of steel and glass?

Not at all- the ones on my blogroll curse a lot more.

McSorley's is a fine establishment.

Indeed! It's a great place to while away a sunny afternoon when you don't have anything better to do than get snockered.