For Unspeakable Horrors, They Sure Are Cute!

No, this is not a post about children, so watch it, smartasses! Also, HERE BE SPOILERS, so bust out your "Best of H.P. Lovecraft" volume and get reading before you continue here, okay?

The redoubtable M. Bouffant linked to a post at the Golden Age Comic Book Stories blog which featured a whole bunch of illustrations from the Astounding Stories pulp magazine. I was especially taken with some of the illustrations of H.P. Lovecraft's fiction. Lovecraft is generally pigeonholed as a horror writer, though a good portion of his work boils down to gonzo pulp science fiction (I can't remember where I read it, but one wag noted that Lovecraft doesn't really write scary stories, but stories about people who are scared). Of course, there are exceptions- The Colour Out of Space is genuinely unsettling, it's almost as scary as Ethan Frome- also a tale of a New England family slowly having the life sucked out of it.

I'd also note that The Shadow Over Innsmouth is really a Bildungsroman, with a happy ending that may be hard to catch upon first read.

Enough of the preliminaries, how about some illustrations of some of the cutest Lovecraftian menaces you've ever seen?

Here we have some whimsical "Old Ones" from At the Mountains of Madness:

I like this one... spread your wings and fly, oh weird, tentacled alien:

This may be my favorite AtMoM illustration- helpful shoggoth is helpful: 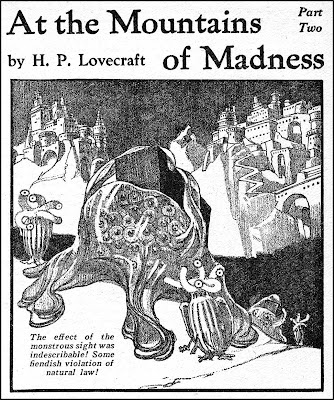 Even cuter are the illustrations from The Shadow Out of Time, which was a cover story inspiring one of the best pulp covers of all time.

Look at these immense, rugose cones with their funny round heads, and their googly eyes. The chap standing akimbo (it seems the illustrator didn't read the story) looks like he's going to lovingly punish them for some hilarious hijinx: 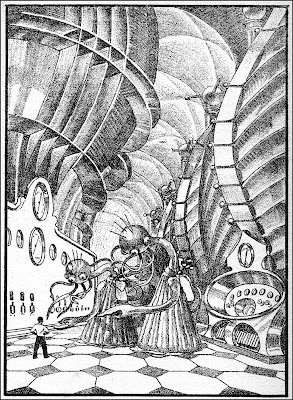 "You crazy cones, I just can't stay mad at you!"


Oh, noes, little man, run before they accidentally drop a giant book on you! 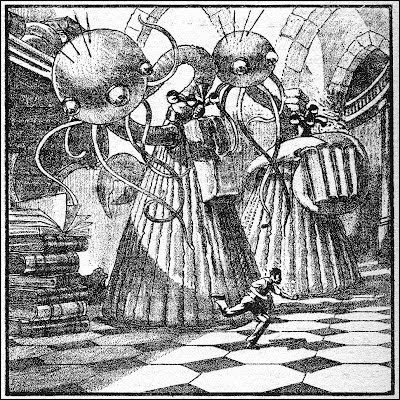 Perhaps my favorite illustration depicts the fellow "guest workers" who labor in the Great Library with the narrator, compiling the records of all of the ages for their immense, rugose, hyperintelligent hosts: 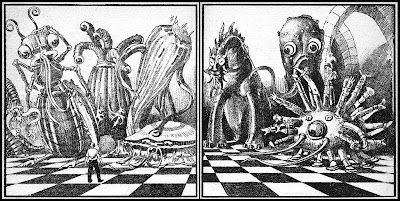 I've long thought that The Shadow out of Time would make a great basis for a workplace comedy, but looking at that picture, I can see it as a children's fantasy adventure- the heartwarming story of a plucky orphan who gets a job in a monsters' library, and goes on all sorts of field trips and adventures with his monster employers (this is not all that different from the original, actually). That googly eyed dude (second from the right) looks like the type who'd try to swipe our protagonist's dessert in the cafeteria...

The funniest thing about these illustrations is that they appeared in the publications that first published these stories (how's that for "Lovecraftian italics", huh?). The seeds for "Where the Old Ones Are", "Pokéthulhu", and "Hello Cthulhu" were there all along, right from the start. LOLcraft, indeed!

You know about this, BBBB?

The Adventures of Lil Cthulhu
~

It looks to me like those cones are playing accordions.

Maybe it's the Weird Al I am listening to having an effect.

You know about this, BBBB?

Oh, yeah! I haven't seen it, but I enjoyed their take on Call of Cthulhu, I believe the film features an intro with an actor playing Charles Hoy Fort, who is one of my favorite cranks- the VonDaniken's VonDaniken.

The Adventures of Lil Cthulhu

Awsone, his room has "non-Euclidean geometry!"

Maybe it's the Weird Al I am listening to having an effect.

Listening to Frankie Yankovic would have a similar effect.

Listening to Frankie Yankovic would have a similar effect.

I am not so sure.

Although Those Darn Accordions might be similar. Or Polkacide could do in a pinch.

Since Smut mentioned it, I saw this somewhere. Still time to organize a road trip!

Although Those Darn Accordions might be similar. Or Polkacide could do in a pinch.

effing tagfail. How does it work?

Since Smut mentioned it, I saw this somewhere. Still time to organize a road trip!

If you can get to New York, I'm game for driving!