May the Fourth be with You

I'm going to preface this post by stating that I will be in serious danger of losing my geek credentials with this post...

One of my cousins texted me the post title earlier today- I had no idea that today was Star Wars Day, but I caught on pretty quickly.

I have to confess that I am a bit of a Star Wars agnostic (cue chorus of boos from grammar school age children... Mass gonna kick my ass). Don't get me wrong, I enjoyed the movies, but I have no real need to see them over and over. I haven't seen the original series in years and can count the number of times I've seen them on my fingers. I've seen the "prequels" once each, and really see no need to see them again... for the record, I've seen the "Lord of the Rings" movies once each and really did not dig them- a quote about "looking fair and feeling foul" comes to mind, but I can't place the source... Yeah, I'm totally going to insprie some serious nerdrage and get drummed out of geekdom with this post.

Getting back to the topic, I saw the original Star Wars in the theater as a young lad, and, like most people, I was blown away by it. How could a small boy not be blown away by a Space Samurai-Wizard Western? I mean, that scene where Luke and Obi-Wan (who should have been played by Vincent Price) walk into that monster bar was friggin' AWESOME! The second movie was also fantastic- the revelation about **SPOILER REDACTED** was shocking, the cliffhanger ending genuinely moving. The third movie had its ridiculous moments, but it still delivered the spectacular fun it promised, so its sucktastic elements could be overlooked (to an adolescent boy, a copper bikini space princess makes up for a lot of sins).

The strain of suck became much more evident in the first prequel, with its crypto-Caribbean amphibian embarassment and its CGI aliens who looked like guys in rubber masks, but the seeds of suckitude were with the franchise almost from its inception:

For a taste of the two fads that dominated the late seventies, there's no better example than this:

To compound matters, George Lucas went back and sowed seeds of suck in his earlier, better films. Yeah, way to step on nostalgia's dick, George!

Despite the foregoing rant, I don't dislike the movies, I'm just not a rabid fanboy. That being said, the movies are part of the cultural DNA, and the rabid fans are awesome... in fact, they've been putting out consistently better stuff over the last decade than Lucas himself. Tell me that this isn't awesome: 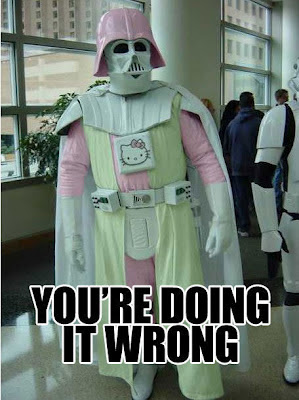 Unfortunately, some of the entries of the blog I linked to are pretty sad, trite examples of sexism and homophobia, which is sad, because this is 100% awesome.

Yeah, the fans have a great track record, and have been better stewards of the franchise than the originator. I mean, how can one top this?

Yeah, there's a galaxy of "funny" out there, lovingly crafted by amateurs. I can't be hating on Star Wars, it forms a shared narrrative that has inspired millions of people around the world... may the fourth be with you, you crazy, brilliant fans.

I couldn't click on any of the links cause Mass is around and if he starts watching Star Wars Youtube stuff, he'll be on here all morning. ;)

I thought that the movies were OK. I guess I'm in the same boat as you. I actually prefer Star Trek etc.

Mass WILL kick your ass. I have to keep it on the down-low that I'm not a rabid fan myself!

Mass WILL kick your ass. I have to keep it on the down-low that I'm not a rabid fan myself!

It's hard to live a double life, isn't it?

"I find your lack of cuteness disturbing."

And not just because of the cameo droid.

That's one of the ones I linked to- it's hilarious. The production values are super high, I wonder how they did it.

I'm a Chad Vader lover, but this is the peak fan achievement. Wonderful and funny and creative all the way through.

The Topper announces that he has seen one Star W. & one Star T. flick in the cinema, thought Original Series Trek was hot shit when barely pubescent but sees it as lame, almost pulp crap now, & read one Star Dreck novel, which blew.

Its like you read my mind!important link You appear to know a lot about this, like you wrote the book in it or something.important site I think that you could do with a few pics to drive the message home a bit, but instead of that,important source this is great blog. A great read. I'll definitely be back. index