Drink With a Poet, Get Attacked by an Orb

So, I am hanging out with a new drinking buddy- let's call him "Larry", and my cousin takes a picture. Well, don't you know, I get attacked by an orb emanating from a paranormal Pabst sign. 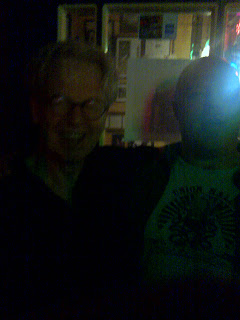 Luckily, with my experience in parascientific knowledge and psionic hardware, I was able to avert a disaster. Oh, and regarding the picture, please note that I am not the guy with the "red hair and glasses".

Larry Kirwan, in a word, is awesome- he's a friendly guy, with a genuinely warm personality. He played a few songs, mostly from Black 47's debut album (Dear Old Donegal, the eponymous song, James Connolly- preceded with an introduction which unabashedly characterized the man as a community organizer and a Marxist-eat that, teabaggers!), and read from his new novel Rockin' the Bronx. I asked him the extent to which the novel is a thinly autobiographical work, and he told me, "It's veiled enough so I won't get my arse kicked." He read the from the opening chapter, which was hilarious, though with a hint of bad things to come, and sang an a cappella rendition of a personal favorite- The Cliffs of Dooneen, which ***SPOILER ALERT*** features in the narrative.

Larry also related a tale of strolling around Times Square as a wet-behind-the-ears immigrant, during a time in which it hadn't been gentrified to chain-store blandness, and read another chapter in the book, which detailed his protagonist's run through a gauntlet of dealers, and panderers.

All told, the night was top-notch... it was four hours of music, prose, booze, and good fellowship, in an intimate, friendly setting. Larry is a great guy with whom to knock back a Smithwick's, and I made sure to tell him not to forget his fans in the Midwest as he's touring in support of the book.

You're a Big Bald Buddy.

He is tremendously friendly, which through me for a bit of a loop when I talked to him at the County Clare after a show.

Hey, he knows he has fans all over the place, and is meaning to expand his tour (he'd recently been in Joisey.

He is tremendously friendly, an all-around terrific guy. I am sure he'll get to Milwaukee.

Now, I gotta go, I have a wake to attend on Long Island, for a true legend.

Sometimes the orbs are friendly, but misunderstood.
~

Drink out of an orb, get attacked by a poet.

I'm going to have to check this guy out!
Watch out for those pesky orbs...

Mike, your orb will always glow for me!