Going to Have to Think of Ginger as a Solo Act

I've been a bit behind the news this week, being preoccupied with the final days of my beloved Fred. For the record, I spent a half hour with Fred in the predawn hours this morning, bidding him goodbye. This morning, he sat under the apple trees onsite with his sister and a bunch of two-legged co-workers until it was time. At 10:45AM, my friend and co-worker Rob, the manager who is the cats' primary caretaker, accompanied by our co-worker Iris, took Fred to the veterinarian's office for one final time.

The company e-mail system is full of eulogies for Fred, and pictures of the handsome beast... it has been one long outpouring of love for this cat who has been a part of our lives for the past seven years: 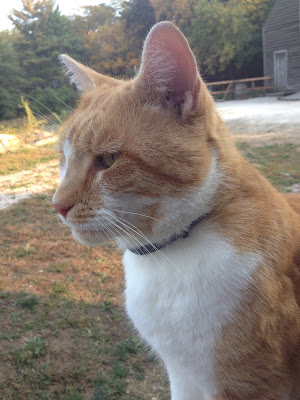 The real weird thing is having to talk about Fred and Ginger in the past tense. The two cats were a package deal and a matching set, though they had widely divergent dispositions- Fred being a mellow beast (sorta like a Labrador retriever trapped in a cat's body) while Ginger is mercurial. They were complementary- their interaction never failed to amuse me. It'll be strange thinking of Ginger as a solo act, without her calm, steady foil: 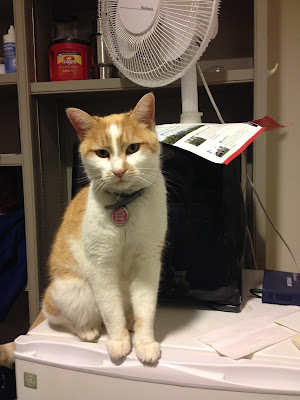 I saw Rob tonight at shift change and thanked him for taking on the burden of bringing Fred to be euthanized... I've been in that position before, and it's not easy. I haven't checked in on Ginger yet, but I'll be poking my head in on her soon. She was clingy last night, tonight I'll let her cling as much as she needs to.