Today was another scorcher, so I decided to take shelter from the heat in the American Museum of Natural History. In the interest of full disclosure, my primary reason for heading down to the museum was the imminent closing of the Secret World Inside You exhibit. I parked in the Bronx and took the 1 train down to 79th St, sharing the subway ride down with some revelers heading to the Dominican Day parade, felicidades, mis amigos Dominicanos.

The museum was a cool respite from the scorching environment of Manhattan, and I proceeded up to the third floor for the exhibit, previewed in this video:

The exhibit started with the topic Meet Your Microbiome, which featured a video presentation by Dr Martin Blaser, who delivered two lectures with the Secret Science Club.

The basic gist of the exhibit was that 99% of the genes in your body aren't yours, they belong to the microbes which inhabit your body. While these microbes sometimes cause illness, most of them are harmless fellow travelers and some of them are necessary for proper health. Even the harmless bacteria provide some benefits, as they crowd out hostile microbes, such as the fungi which cause athlete's foot.

The exhibit was broken down into sections detailing the various biomes of the body, the introduction to the skin's biome being a nice bit of poetic language expressing scientific truth:


Your skin is the largest organ of your body. In an average adult, this protective layer covers some 20 square feet (1.8 square meters). Think of your skin as a sprawling countryside of hills and valleys, cracks and crevices, smooth slopes and rough terrain. Some parts are cool and dry, others warm and humid, and still others oily or forested with hair. Many species of bacteria, fungi, and other microbes call this landscape home.


There was a display about microbial transfer, with an amusing report of roller derby players having more similar microbiomes after the bruising contact of a match.

Another big part of the exhibit dealt with pregnancy and childbirth- in the womb, a fetus is protected from bacteria and viruses in its amniotic sac, and during natural childbirth, the baby picks up a bit of its mother's microbiome while exiting through the birth canal. Infants born by cesarean-section do not receive this beneficial microbial slathering, so swabbing C-section delivered babies with extracts from mom's birth canal may show some promise in remedying this microbial deficit.

The section of microbes' role in the health of their host was fascinating- there were placards detailing Helicobacter pylori's mixed role in human health (described in some detail in this lecture recap). Another bacterium given accolades is Lactobacillus johnsonii, which may provide hosts with lower rates of asthma and allergies which affect the lungs. Bacteroides fragilis can reduce inflammation in colitis sufferers. One particularly funny display illustrated the use of fecal transplants to aid colitis patients infected with Clostridium difficile: 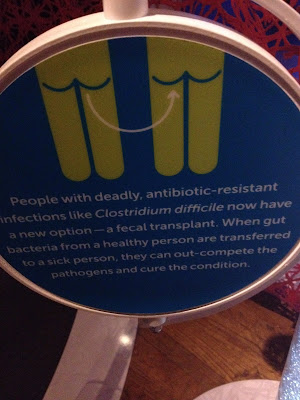 Yes, I am an overgrown eight year-old.

There was also a really funky model of a macrophage engulfing harmful staphylococci while ignoring useful bacilli and red blood cells: 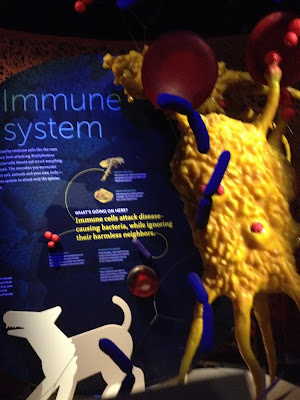 The caption of the display likened the macrophage to a well-behaved dog, warding off intruders but welcoming to friends. Can you dig it?

Other sections explored other bodily biomes, such as the mouth, with a special focus on the role of acid-producing bacteria in causing tooth decay.

The exhibit featured a lot of interactive displays. One was a game called 'Build your microbiome', which simulated the development of gut bacteria through diet, stressing the importance of probiotics and vegetable matter which provides a lot of nourishment for gut bacteria. One grand interactive exhibit portrayed a woman laying on a table, surrounded by icons which, when touched, would bring up displays of the microbes inhabiting her body, from her hair to the soles of her feet.

The exhibit was really well-done, with a myriad of tiny lights to symbolize the various symbiotic microbes and a lot of buttons to push for inquisitive children. It was a charming exhibit, conveying a topic which is still a bit 'foreign' to a society raised to believe that 'germs' are bad. It was definitely worth heading out of the house in the blistering heat to attend this cool exhibit.

A nice addition to this exhibit would be my dad.

"Look kids, if you're relentlessly stubborn and contrary about all this stuff, here's what will happen to you!"
~

Does your dad look cute in a halter top and shorts? Does he have what it takes to be an AMNH microbe model?