People tend not to be 'lukewarm' about snakes, they either hate and fear them or love and cherish them. I am firmly in the latter camp. The idea of killing a snake, unless you are going to eat it, is repugnant to me. I dig the Ophidia.

Yesterday, while in the basement of the building which houses my office, I noticed a diminutive visitor: 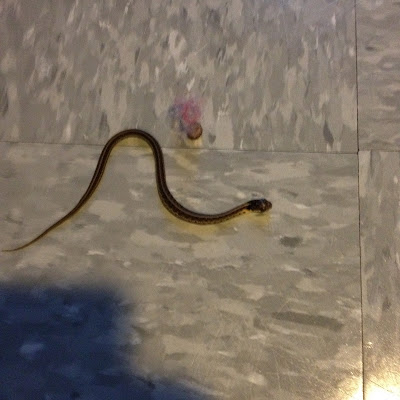 This young Dekay's brown snake (Storeria dekayi), not to be confused with Australia's eastern brown snake (Pseudonaja textilis) which is venomous enough to kill Wyoming, was in very unfriendly surroundings- the cool, smooth basement tiles really aren't conducive to the health and happiness of an ectotherm which gets about in a legless fashion.

I was reluctant to pick up the snake, out of fear of harming it (gotta watch that grip strength), so I tried to coax the little thing to climb onto my hand... the snake's impulse was to try to take shelter under my hand. Our brown snakes are known as city snakes, they thrive in an urban environment, even one as congested as New York City, largely because they can shelter under all sorts of debris, including big, meaty hands.

I ended up picking up the snake, as gingerly as I could, and placed it outside in a nearby patch of Pachysandra. Before placing it in its new digs, I hastily snapped a picture, the quality of which is not so great due to my haste and the somewhat poor lighting: 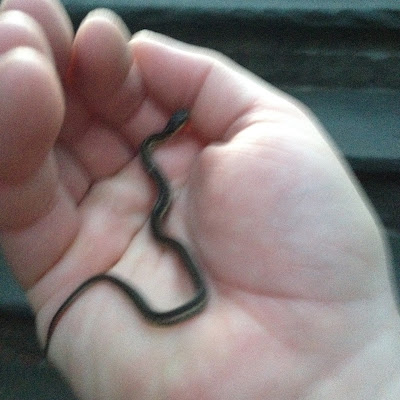 I was careful to place the snake on the other side of the building from this fine critter, I really don't want my new friend getting eaten by one of my old friends.

I visited a friend who had a farm one time. He showed me his grain bin for the horse feed and the black snake that lived in it. He considered the black snake a true friend who kept all the mice from eating the horses' dinner. (And not that anyone asked, no one's allowed to kill spiders in my apartment. There's a window ledge in the bathroom with the corpses of all the good things one of them has done for me.)

you see to be not a Bastard in your treatment of that reptile. I CALL SHENANIGANS....

Snake so smol! Very squee.
I like a snake both harmless and wee,
That if a meeting were to be
betwixt he and me
I would not run and wee
but coo to see.
That 'twas held so very gingerly
and 'twas laid most artfully,
'twas great of thee,
And thanks from the forked tongue
of Ophidia to ye.

Well to be honest, plenty. You just have to remember no pinching or squeezing.
~

Trying to imagine what that tiny little fellah is going to swallow. Ants? Even a ladybug is going to be too much to handle...

I can see that you are an expert at your field! I am launching a website soon, and your information will be very useful for me.. Thanks for all your help and wishing you all the success in your business. Castlebrook Barns

our Mom used to hate how often we brought home garter snakes or salamanders. She would have been appalled at that tiny little fella, because he would have gotten away from us almost immediately, and freaked her right the hell out, probably in the bathroom....