The Saga of Big Ugly

My people are outdoorsy and have a well-developed sense of intellectual curiousity... we are rock-turners, puddle-jumpers, and critter-catchers. The women of my clan are beautiful, but tomboyish... they wade in ponds and throw credible spiral passes, and they are gifted comediennes. Last Thanksgiving, my nieces, the daughters of my brother Vincenzo, and I spun a goofy yarn about giving a catfish living in a pond near their house a makeover. The catfish, dubbed 'Big Ugly', was to be caught and a beautiful wig was to be placed on its head and some lipstick applied to its wide, unlovely mouth. This fish-out-of-water-and-in-a-beauty-salon story was the source of much mirth over the past couple of months. On Sunday night, I got a phone call from Vin... he and one of the girls went down to the pond to feed some of the local turtles. Being the curious types, they brought a net with them so they could catch any particularly interesting critters for further examination... and then it happened, they caught Big Ugly, luring him within netting reach with a chunk of day-old bagel.

I have to say, Big Ugly is just that: 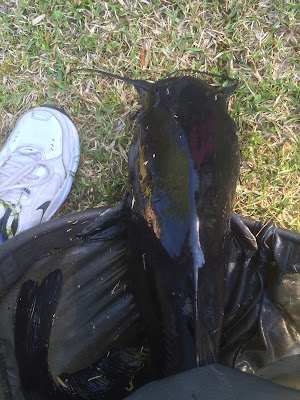 I'm pretty sure Vin wears a size eleven or eleven-and-a-half shoe, for the sake of comparison. Needless to say, there was a lot of excitement, and all of the kids came out to see this fish that has loomed so large, and so ugly, in their minds.

After Big Ugly's photo op, it was released into the pond. The next time they catch Big Ugly, they'll have a nice wig fashioned out of Spanish moss for it... with any luck, my next catfish post will be about Big Pretty.

So ya got got a buncnh ofhoydens in your family. Good

We've never been big on gender stereotypes, we're all a bunch of egalitarians, and adventurers.

I'm sure his or her fellow catfish find him (or her) quite fetching!
~

On first glance, I was fairly sure that was some sort of shiny plastic Star Wars-esque costume, not a catfish!