I have an intense love/hate relationship with Japanese knotweed (Fallopia japonica)... on the one hand, it's one of the most noxious invasive species to haunt the United States, on the other hand, it's not only edible and probably healthy to eat, but it happens to have a nice, tart taste(reminiscent to that of its relative, rhubarb) that I enjoy.

Normally, I eat this plant out of hand, munching on fat, juicy stalks while whacking down thinner, less choice ones by the score. 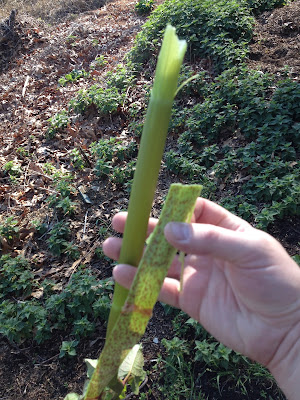 The purple-mottled peel comes off rather easily, in long strips, exposing the tender interior of the stalk. Typically, I'd munch on these suckers like one would munch on a celery stalk, but I decided that I'd peel a bunch of them to be cooked when I get home from work: 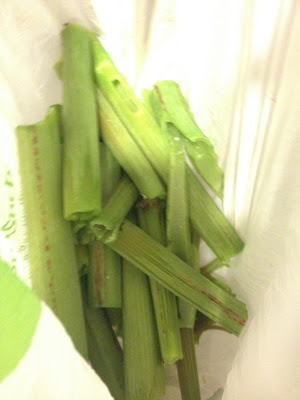 I figure I'll begin simply, by adding them to stir-fries... they would probably taste great in counterpoint to caramelized onions. There are recipes for it on one of my favorite websites, Eat the Invaders, as well as traditional Japanese recipes for this horrible-yet-useful plant, known as itadori in its homeland.

I figure I can use all of the recipes I can find... I'll be eating this stuff for months, for America.

Don't overdo the oxalic acid eating the raw stuff!
The nearest equivalent we have here is turkey rhubarb, with the same sorrel sourness.

Also we have sea spinach a.k.a. Tetragonia, but that's a native so not quite equivalent. Belongs to the ice-plant family rather than the docks.

Fret not, old chum, I take my omnivory very seriously, so I'm not overdoing it on any one thing... not even booze.

The sea spinach has quite a distribution, even though it seems a bit too, shall I say flowery, to be a relic of Gondwana. Need to research this one a bit.

Had dandelion fritters for breakfast.
Eat the weeds, save on poison.