The big news in the U.S. is the giant blizzard which buried much of the eastern seaboard. Here in New York's northern suburbs, we got about a foot of snow... this is the drinking fountain outside the front door of my primary workplace: 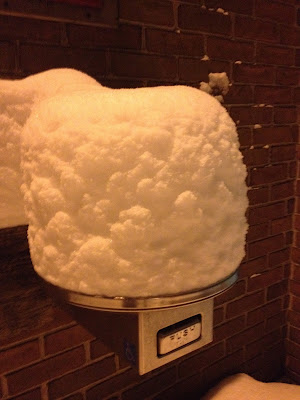 Whenever we get a forecast weather 'event', my first inclination is to hunker down and stay in place. At about 4:30AM Friday, I filled up the gas tank of the car. The rest of my waking hours on Friday were spent texting back and forth with other coaches concerning our Saturday morning volunteer gig (we all decided to cancel, most of the kids wouldn't be going anyway and those who did could be taken care of by those coaches who lived a short subway ride away) and cooking a big pot of red beans and rice to pack for a long weekend at work. I packed an extra thermal undershirt, an extra flannel shirt, and an extra sweatshirt in case I needed a change of clothing. I even packed my little hand-cranked radio in case we lost power, and I 'topped off' the batteries of my phone and my good rechargeable flashlight- it pays to be prepared. One of my co-workers texted me to let me know that he would be taking Fred and Ginger home for the weekend, so that they would be more comfortable than they'd be at work (not having cat care duties was one less thing for me to worry about, but it did scuttle my plans to stuff the cats under my sweatshirt if the site lost power).

I arrived at work at 9PM Friday night and I expect to leave at 1AM Monday morning. I am where I need to be, I'm sure that my home is fine, even though my beloved City of Yonkers probably received more snow than the worksite.

The worst conditions prevailed last night, when visibility was abysmal and a strong wind whipped snow particles around. I limited my time outside... the second time I took a spill on icy pavement (seriously, everybody, learn ukemi), I decided to remain inside unless there was an urgent situation- the alarm monitoring company alerts us of temperature drops which would indicate damage to a building. It's axiomatic that if you are injured, you can't react to emergencies. I pretty much stayed indoors most of the night binge watching, yeah you got it, Science Ninja Team Gatchaman... I finally finished the series, and the last fifteen or so episodes are a crescendo, a dramatic sci-fi tour de force. It was the perfect way to kill time during a blizzard.

Around 4AM, the plowing contractor sent a crew to plow out the parking lot and shovel/snowblow the pathways and sidewalks. At sunrise, the snowbanks were infused with a gorgeous rosy glow, which contrasted gorgeously with the blue shadowed areas to form a lovely impressionistic effect: 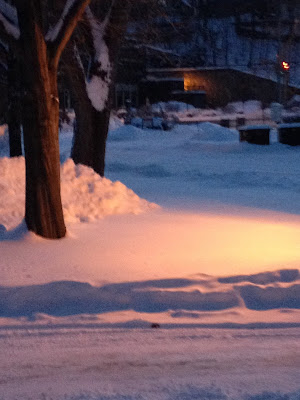 I was able to catch a few hours of sleep on a settee- I'm used to sleeping rough when I have to (I thank my parents for insisting on camping trips during summer vacation). When I finally got up, I brewed myself a cup of coffee, put on a couple of layers of clothes, and went on a daytime inspection tour of the site... no damage, the contractors did a great job plowing, everything was in order. On the road adjacent to the site, the municipal workers are doing a great job carting off the piles of snow: 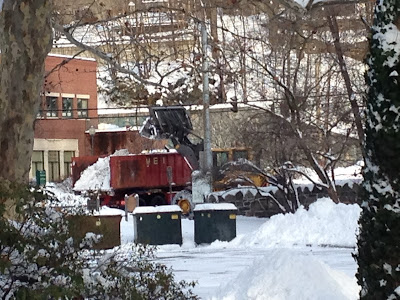 This evening should be a quiet one, the perfect evening to do paperwork- composing next month's schedule and last month's expense report.

Mom, who lives in northern Virginia, is doing fine, even though her neighborhood received thirty-three inches of snow. She never lost power and one of her neighbors (one of her many 'adopted' children) will plow out her driveway. I made sure to call her when I woke up today.

The hard part will come after work... there are the roads to contend with, and a sure-to-be-bad parking situation in my neighborhood. I'm resigned to the prospect of shoveling out a parking spot at 2AM after leaving my car in a less-than-optimal place for the time being. I believe that the City of Yonkers cancelled alternate side parking rules in order to facilitate snow removal, but I'm not optimistic about finding a spot. In the grand scheme of things, I can't complain... due to a combination of planning and luck, I fared a lot better during this storm than a lot of people. I may have slept rough, but I slept safe and I slept warm.

Your drinking fountain seems to think it's a Snofreeze machine.

ProTip: Get yourself an external power bank similar to this one I got at Amazon for $25. Get at least 10000mAh capacity and it'll charge your phone AND your tablet multiple times without access to AC. I take it with me all the time, just to be safe...

I've got the Thundermobile about 5/6 the way dug out.
~


Your drinking fountain seems to think it's a Snofreeze machine.

And me without the tequila, triple sec, and lime.

ProTip: Get yourself an external power bank similar to this one I got at Amazon for $25. Get at least 10000mAh capacity and it'll charge your phone AND your tablet multiple times without access to AC. I take it with me all the time, just to be safe...

That's not bad at all. We never lost power, but something like that would come in handy.

I've got the Thundermobile about 5/6 the way dug out.

I ended up being able to park a couple of car lengths ahead of my usual spot, in a perfectly clear spot between two driveways... no digging necessary. It pays to like small cars.

I did spend a few hours on Monday digging out the street on which I live, breaking up piles of snow that constricted the roadway. A passing DPW driver saw what I was doing and cleared out a nice stretch of roadway for me, and a guy working for the Board of Ed clearing the vicinity of the nearby school cleared out another stretch on his way back to the yard. Yonkers, FTW!