Poking around the t00bz, I found this great blog post by Dr Maggie Greene, an assistant professor in the Department of History, Philosophy, and Religious Studies at Bozeman's Montana State University. The blog post dealt with a 1980-vintage Chinese comic book adaptation of the original Star Wars. As much as I loved that movie, I think I may prefer this Chinese version, probably because this particular Obi-Wan Kenobi was the proud possessor of a rocket-shooting motorcycle: 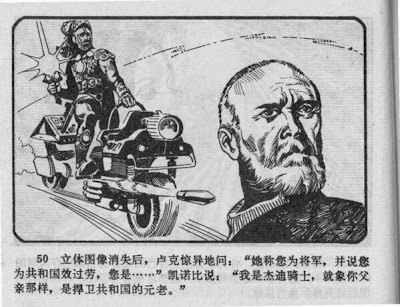 Even better is the fact that Obi-Wan is enough of a Scotch drinker to warrant the presence of a barrel of J&B in his hermitage: 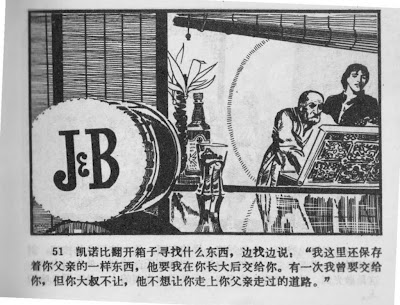 An enterprising gentleman named Nick Stember has translated the comic, and has a panel-by-panel breakdown of the work (you can also download a PDF of the whole untranslated comic at one of the links). The whole thing is a gem, with the "Star Destroyer" of the opening being replaced by the Space Battleship Yamato, and Darth Vader contemplating an attack on the Kennedy Space Center: 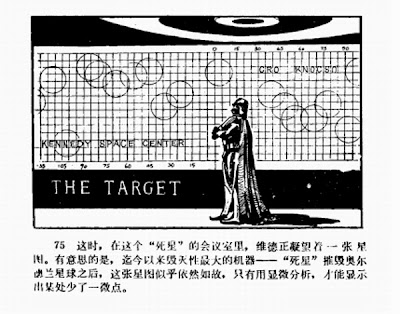 As if that's not enough, there's a kickass Frazettaed-out Darth Vader posing in front of a Triceratops: 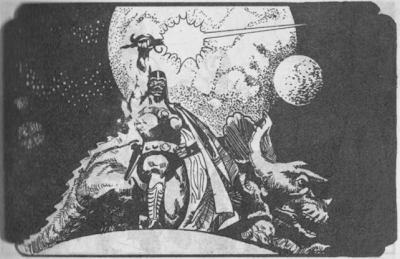 This thing is one-hundred percent awesome, and you should really check it out. It's easy enough for fans to follow along, even with a language barrier, because it is very faithful to the movie's plot. The visuals are truly a treat, though- one gets the impression that multiple artists were working from a plot synopsis and a couple of promotional pictures from the second movie, while never seeing the first one. If you were a fan of that first movie, this comic is even better than disco Star Wars:

We got Death Star!
~

And that J&B product placement is pretty amazing for 1980s China. It'd barely caught on here then.

We got Death Star!

And that J&B product placement is pretty amazing for 1980s China.

I'm not even sure it's product placement per se, I think it's just something they found graphically "cool".