Today being Dr Martin Luther King, Jr. day, I figured I'd look at how the National Review's "Corner" has tried to cope with King's life and legacy... by shoving its own ignominous past into the memory hole At the National Review website, there is a perfunctory post which completely glosses over the fact that, as commenter MikeM points out, National Review was extremely hostile to Civil Rights and Desegregation efforts throughout its ignoble history. It's no mystery that the particular moment of history that William F. Buckley tried to stand athwart yelling "STOP!" was the moment that desegregation was beginning to be implemented. In 1957, Buckley wrote his most infamous take on race:


"The central question that emerges . . . is whether the White community in the South is entitled to take such measures as are necessary to prevail, politically and culturally, in areas in which it does not prevail numerically? The sobering answer is Yes – the White community is so entitled because, for the time being, it is the advanced race. It is not easy, and it is unpleasant, to adduce statistics evidencing the cultural superiority of White over Negro: but it is a fact that obtrudes, one that cannot be hidden by ever-so-busy egalitarians and anthropologists."

"National Review believes that the South's premises are correct. . . . It is more important for the community, anywhere in the world, to affirm and live by civilized standards, than to bow to the demands of the numerical majority."

"The South confronts one grave moral challenge. It must not exploit the fact of Negro backwardness to preserve the Negro as a servile class. . . . Let the South never permit itself to do this. So long as it is merely asserting the right to impose superior mores for whatever period it takes to effect a genuine cultural equality between the races, and so long as it does so by humane and charitable means, the South is in step with civilization, as is the Congress that permits it to function."


Yeah, just let that sink in, all the while remembering what Buckley characterized as "cultural superiority": 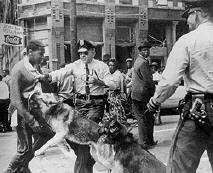 Also in 1957, Richard M. Weaver wrote a book review in the National Review titled "Integration is Communization". Here's the "money" quote from this piece:


“‘Integration’ and ‘Communization’ are, after all, pretty closely synonymous. In the light of what is happening today, the first may be little more than a euphemism for the second. It does not take many steps to get from the ‘integrating’ of facilities to the ‘communizing’ of facilities, if the impulse is there”


In 1964, to commemorate the tenth anniversary of the "Brown vs Board of Education" decision, Buckley wrote this:


"But whatever the exact net result in the restricted field of school desegregation, what a price we are paying for Brown! It would be ridiculous to hold the Supreme Court solely to blame for the ludicrously named 'civil rights movement' – that is, the Negro revolt . . . . But the Court carries its share of the blame. Its decrees, beginning with Brown, have on the one hand encouraged the least responsible of the Negro leaders in the course of extra-legal and illegal struggle that we now witness around us. . . .

"Brown, as National Review declared many years ago, was bad law and bad sociology. We are now tasting its bitter fruits. Race relations in the country are ten times worse than in 1954."


National Review was at the vanguard of the "idtellectual" wing of the conservative movement, and their staff had a hate-on for anyone who was working for desegregation and equal rights. Again, WFB's stated purpose was to stand athwart history yelling "STOP!", by which he really meant, "STOP GRANTING CIVIL RIGHTS TO UPPITY NEGROS AND STRIDENT WOMEN!" There's no memory hole deep enough for the cornerites to bury all of the garbage that their magazine has written about Dr King's struggles, and their failure to own up to their past sins is doubleplusungood.


For a good dissection of conservatives' failed attempts to co-opt Dr King's legacy, this post is hard to beat. Also, hat tip to MikeM, the commenter at "NRO" who was the catalyst for this post.

Posted by Big Bad Bald Bastard at 7:40 AM

It's illustrative that they felt that race relations were so much better in 1954. Viewed from the standpoint of the oppressor with no self-awareness whatsoever, I'm quite certain it truly felt that way...

The coping mechanism of choice today is denial.

Glenn Greenwald has a post up about MLK's legacy, too.
~

Whitey being forced to take money from colored people will destroy free enterprise. Good to know.

ahem. On my website I've posted a link to the "I have a dream" speech and an interview with Rosa Parks. For some reason it's very important to me that we get that story right. She was not sitting in the white section of the bus.

I imagine they are also having a lovely time dealing with the inauguration.