Seduction in the Tea House and Other Tales of Urban Lust 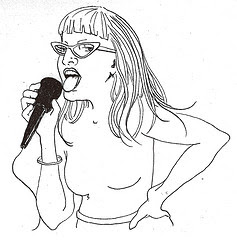 Well, now that I have your attention... Last night, I attended a special birthday performance by Friend of the Bastard Saasha Foo. Well, I'll begin by saying that she should consider a name change to Saasha Feu, because the girl was on fire- she called her set Devil with a Heart of Gold, and I instantly thought, "This could be the basis for a hilariously warped musical comedy to submit to the Fringe Festival."

Miss Foo introduced herself with the eponymous ad-libbed tune, then launched into a hilarious evisceration of Burt Bacharach's Wives and Lovers, turning the dated "default sexism" of the song into a satire of the Beauty-Industrial Complex. Yeah, Brazilian waxing and bleaching "down there" were undreamed-of in Burt's heyday, but Saasha worked them into her brutal-yet-affectionate takedown of the song... hey, it's 3PM, hubby's due back by 7, so girl get cracking! She followed this with another genre-subverting take on a breakup-and-resultant-heartache song, Was I Just Another Blonde to You? Confronting her ex with a younger version of herself, she asks the inevitable questions, such as: "Was I just another sticky bun to break in two?" Put a "Y" on the End of "Man" was her take on polyamory, in which Saasha sings that she wants to schtupp just about every man she sees on the street. The show-stopper for me, though, was the hilarious Park Slope Gigolo, in which Miss Foo sings of the eponymous "working man" paying his way by servicing the stay-at-home mothers who congregate in the local Tea House. The surefire cure for post-partum depression, the Park Slope gigolo ("the sugar in your Bigelow") has his own baby sitter. Saasha followed this up by a mission statement- she wants to start pimping d00ds out to supplement her income (motherlovers take notice, Brooklyn fathers take heed). Saasha's show of love for country music took the form of a takedown of a coked-up former boss who looked on her ass as his "personal property"- a Foo-vian take on Take This Job and Shove It. Her finale was another satire of the pressures on women to conform to unrealistic standards of beauty (a duet with a friend)- The Tapeworm, Gay Porn Diet. Why suffer at the gym, or deprive yourself of calorie laden treats when you can enlist the services of a special little friend, a Platyhelminthine buddy which will allow you to sit on the couch all day long, eating cinnamon rolls slathered with an entire tub of margarine and watching gay porn? Trying to fit into that wedding dress? Just enlist the services of a tapeworm, just make sure it doesn't poke out during the ceremony. Wow, what a finale. Throughout the night, I had to restrain myself from drinking while Saasha was singing... I had visions of Hoegaarden shooting out of my nose. Yeah, she's that funny, and her brilliantly distorted version of the universe (the Foo-niverse, if you will) is a great place to visit for a couple of hours. Adam Klipple and Gary Wang provided an excellent musical background for Saasha's gleefully cracked songscapes.

While I can't find any "spit take" inducing videos of Saasha, here she is in her "serious" mode... I apologize for the darkness of the video image, but one can just make out Miss Foo's trademark "cat eye" vintage glasses and bangs:

After the performance, I told her that, within ten years, drag performers would be imitating her. She replied, "That's the nicest thing anyone's ever said to me."

Rock on, Saasha Foo, and get cracking on the musical!

I couldn't make out much on the winetop, but the sounds were good...
~

she REALLY LIKES that ice-cream cone.