In Keeping With Our Weekend Tradition

Well, the new Gogol Bordello album has been getting airplay on my favorite college radio station. Yes, once again, Eastern European inflected rock is all the rage. This, and two threads concerning cover songs, reminded me of a tape that my great and good friend J-Co got as a souvenir from his parents' vacation to Croatia. Knowing that their son was a huge music fan, they bought a casette of the album Ujed za dušu by Yugoslavian rock band Riblja Čorba . The album cover art is, to my mind, one of the all-time exemplars of record packaging: 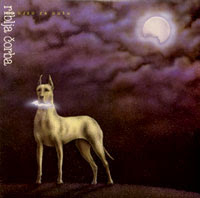 While the album features a... heartfelt tribute? to Dejvid Bovi (the opening guitar riff reminds me of a Thin Lizzy song), the first song on the album, Lud Sto Posto, kicks off the Serbian soundwave that is Ujed za dušu:

I have to confess, I did not know anything about the band, but, besides being the Monsters of Yugoslav Rock, they seem to have included quite a bit of political material in their music... while they seem to have opposed the Yugoslav War, their lead singer, while critical of Milosevic, espoused Serbian nationalism, thus eroding the band's appeal in the rest of the Serbo-Croatian-speaking world.

Posted by Big Bad Bald Bastard at 4:17 AM

All that, and effing squirrels!
~

Eggs or ratfucking: which came first?