For years, I have made limoncello, a liqueur typically associated with Italy's Amalfi Coast. My routine was to drive to Greenwich, Connecticut in order to buy pure grain alcohol, which was illegal to sell in New York State. A few years ago, sales of grain alchohol were made legal, something which I discovered by accident in a local liquor store. The liquor store owner told me that he had found out that 'grain' had been made legal by leafing through the catalog of one of his distributors- there was no major announcement.

Earlier this week, I placed a special order for a case of Everclear grain alcohol, so I can make two two-gallon batches simultaneously. I felt pretty badass as I carried this case, with it's 'Danger: Flammable' warning on the side, to my car: 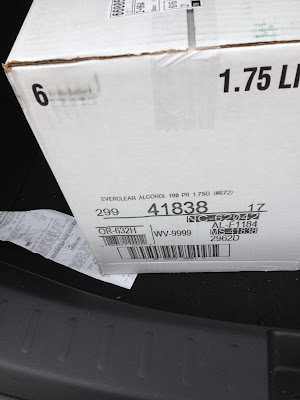 Tonight, on my way to work, I stopped at a store I call the 'food TARDIS' (it's bigger on the inside than the outside- it looks like a small, unassuming storefront, but it has a cavernous basement filled with amazing produce at low, low prices) and bought a variety of citrus fruits- lemons, oranges, and limes in order to make a multi-citrus blend to supplement the traditional limoncello. The long-range summer forecast is 'boozy'.

Best of luck on this project!

(And not just because I have occasionally enjoyed a steak in it.)

P.S. Back in collage, we used to drive to NY to get cheap beer. Then go back to CT. *hic*

The real problem was the 'no alcohol sales after 8PM, except in bars or restaurants' policy, and the even worse, 'no beer on Sunday, period' policy. I'll be heading up to the old Prestigious Bastion of Prestige for reunion this Memorial Day weekend.

Wish your mom a happy Mom's Day for me.

Maybe I'll be around some day in W.V. when you both pass through, I bet she'd like the birdie porch.
~

Maybe I'll be around some day in W.V. when you both pass through, I bet she'd like the birdie porch.

Next time I'm in Prince William County, I'll coordinate ahead of time.

Going to a college in Evanston IL, I learned about blue laws (!) (something which was new to me, being a yute from California). And my college learned soon enough about liquor stores that delivered on Sunday. Odd how that worked out.

Won't say how it happened or that it was related to my abrupt return to California, where I finished college. NDAs and statutes of limitation and whatnot prevent me from saying more.

Anyway, Limoncello is delightful and I hope you are making the 60-lemon version which I do deem to be the best home-made hootch of all time.