Last night, I had a close encounter with one of the neighbors: 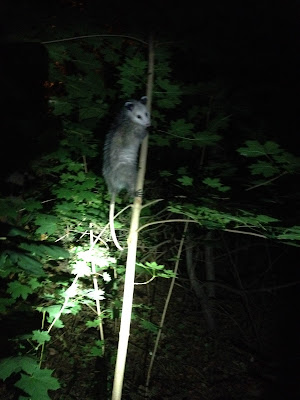 The Virginia opossum (Didelphis virginiana), the only marsupial in temperate North America, is an unlovely beast, often characterized as looking like a rat's ugly cousin. In the picture I posted, though, the face evinces a certain cuteness, looking more like a wallaby's face than a rat's.

Its profile is less flattering... Montgomery Clift it ain't: 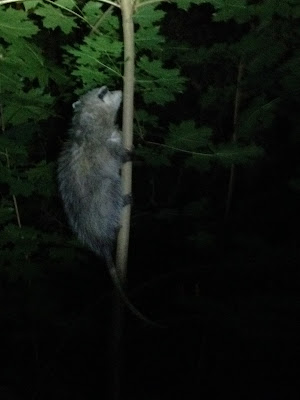 Possums are stupid beasts, and slow, but they are proficient arborealists. I came upon this critter while on the walkabout, and it took a while to get hip to my presence, whereupon it started climbing. It got to about head height, but I probably could have nabbed the sucker if I had wanted to. Possums are extremely short-lived creatures, largely because they are easy prey- on one particular island off the Georgia coast, they tend to live for a couple of more years than usual. Despite being dumb, slow, and short-lived, they are increasing their range... if anything, they are survivors, as put-upon as they are. I happen to like them, they have an underdog's undeniable charm.

Posted by Big Bad Bald Bastard at 1:48 AM

I got a 'possum story I feel conflicted about. We have birdfeeders, plural, in our back yard. Now, I like feeding the little featherpigs that come along (with appetites one part locust, one part wildfire). But I get that squirrels and raccoons will treat a food opportunity as, well, food. And in My mental space, possums are equally part of our neighborhood wildlife welfare scheme.

My husband is a dead shot with an air rifle. He killed a possum in our yard, and I'm months later a little fucked up about it. He says he knows it was a kill shot, but it didn't die in our yard. So where did it and how long was it hurting, I ask, but can't answer. I have conveyed to him my desire that he not kill rando ugly lawn fuckers on the basis of they can die and he'd rather it. Because I'm pretty much about fox and badger and squirrel and raccoon being down within human habitation limits because this is a sign of evolution working.

Obviously, I don't know what kind of air rifle he used - certainly there are professional models that are powerful enough to take 8-10 mammals (they're very expensive, though), but most are underpowered for anything bigger than jackrabbits. You're right, they're most likely to cause the game to bleed out, which can be slow. I'd recommend a .22 - you can get them with built in suppressors now, which are very cool - or if not then a crossbow for suburban hunting/pest suppression...

Australian ones taste OK if you smoke the meat first.

They hoover up ticks when they travel around the forest floors, and then it turns out they are GREAT groomers. Ticks-be-gone.
~

First one I saw in person in the "wild" was crossing a wide but deserted street in L.A. under sodium lights; I said to myself That's the ugliest effing mongrel on the planet before I got a closer look & realized the species.