Tonight, after contemplating a glorious full moon peeking out from behind a thin curtain of cirrus clouds... 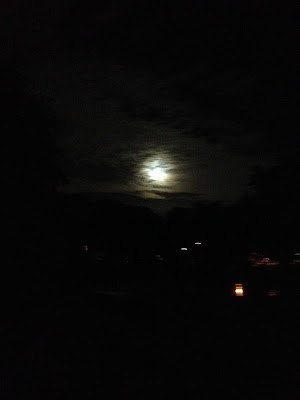 while anticipating the upcoming lunar eclipse, I decided to revisit the "blood moon" lunacy that's been bandied about by all sorts of nutbags. The usual Protestant evangelical eschatological crowd, has been joined by a coterie of Mormons, which necessitated a response from the church hierarchy... can't have any freelance prophets horning in on the grift, now.

As an aside, I just stepped out for a spell and there is a nice 'bite' taken out of the moon's face... soon, the moon will be in the Earth's shadow, around 10PM locally.

As if the eclipse lunacy weren't bad enough, there was a parallel end-of-the-world prediction concerning an asteroid impact that was supposed to wreak havoc on September 23rd or 24th. Yeah, there were two competing apocalyptic predictions concerning what has pretty much turned out to be a routine month. The funniest/saddest thing about the asteroid link is the number of linked Youtube videos which have now been removed- those people who were convinced that the government was lying to the public about the upcoming catastrophe have all gone chickenshit and removed their stupid 'warnings'. It's probable that a small number of them will remain convinced of their eschatological fantasy, even though they were burned again.

The mainstream media has some complicity in this lunacy, particularly by using the term 'blood moon'. Jumping Jesus on a pogo stick, I'd never heard a total lunar eclipse referred to as a 'blood moon' until last year, when this end-timer lunacy about the eclipses began. The very term sounds like something a bunch of Bronze Age goat-herders would have come up with, it's not the sort of thing that a species that has set foot on the moon would call the moon.

It's a beautiful night, the moon is looking particularly gorgeous, and it will look gorgeous when it is obscured by the Earth's shadow. I'll be heading out to look at it any minute now. It's a disgrace that so many people are freaking out about something which should be a wondrous spectacle. They need to get their noses out of their books of magic and to look at the sky. My life is pretty good, and the planet is a pretty fine place even with all of its problems, why the hell would I want such a place to meet its end?

You got more than I got. I'm here in Columbus, trying to get more stuff thrown away. Otherwise I might have been on the mountain in W.V., a much better place for sky-peeping (although I don't know if it was clear there last night, either).
~

The Great Sky Dragon had unswallowed the moon by the time it rose here. Depriving the local journamalists of the opportunity to promote the magical-thinking christianist-eschatology narrative.

You got more than I got. I'm here in Columbus, trying to get more stuff thrown away.

With Boehner going, looks like all of Ohio is cleaning house.

Scotopic, lycanthropic even. I love going 'on the scout' with the cats at work, and I have to confess a bit of envy whenever I consider how much more they are seeing at night. I always laugh whenever they run towards me, when all I can see is a pair of tapeta lucida bouncing along in my direction.

The Doktorling Sonja is unimpressed when she sees me wearing dark glasses inside. Says it's "creepy". She will change her tune now she is old enough to experience the family changes.