One of the fringe benefits of my job, which very few of my co-workers avail themselves of, is the presence of several fruit trees on our various sites: apple trees, mulberry trees, black walnut trees (I use the whole fruits), at least one pear tree, and a couple of cherry trees. The cherry trees on site yield small sour cherries, which I like to eat out of hand, but which are less appealing to people who don't have a taste for tang (insert filthy joke, you dirty little lambies).

While I like to eat the sour cherries as is, they are perfect for making maraschino cherries. The maraschino cherry, here in the 'States, has mutated into a bleached, brined fruit that has been marinated in high-fructose corn syrup, almond flavoring, and red dye number 666, or put more succinctly, a crime against nature. By the way, the reviews for this pamphlet are hilarious, "T. Bartlett", I doff my cap to thee.

At any rate, I decided to replicate the genuine maraschino experience, beginning with picking about a gallon worth of sour cherries on the job. After washing the cherries in several changes of water, I took on the daunting task of pitting the perishers. 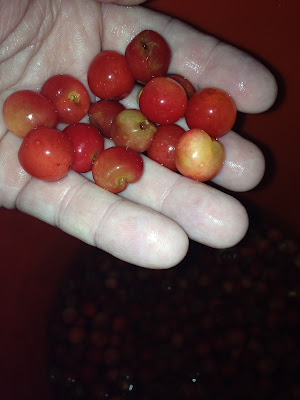 Not being a big single-purpose kitchen gadget type, I didn't want to spring for a cherry pitter (I make an exception for a lemon squeezer because I go through a ton of lemons in the course of a year). Instead, I used the chopstick method for cherry pitting, and spent about an hour and a half pitting cherries: 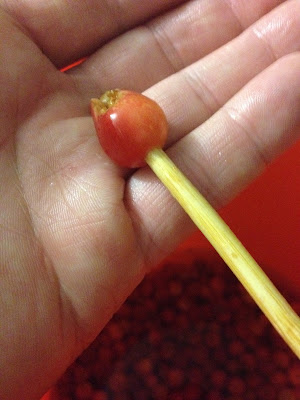 Then, I made a simple syrup, boiling equal parts sugar and water, and added a cinnamon stick and some almond extract. I reduced the heat to a simmer and dumped in the pitted cherries, cooking them for a couple of minutes. After turning off the flame, I added a bottle of Luxardo cherry liqueur. Check out the beautiful bottle: 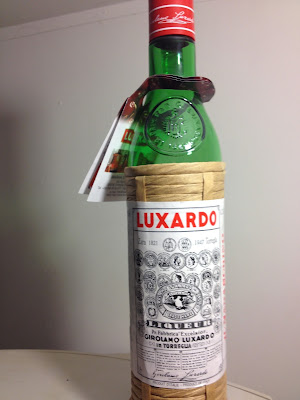 The cherries have been sitting in the syrup-and-booze marinade for a couple of days now, and have taken on a lovely flavor, a mixture of sweet, sour, and spicy, with a hint of a boozy burn. I've never been a fan of the horrible commercial product (though bees seem to love the things), but these are a revelation. These little beauties are exactly what a cherry bomb should be... they'll have you singing:

Once you've had the real deal, you'll never go back, leave the evil red stuff for Brooklyn's bees.

One of the lesser-known facts of modern life: those nasty, technicolor cherries? They're actually crabapples.

Life is too short to eat crap, old chum!