Since the death of our mouser Moses, we have had two cats in our employ, siblings Fred and Ginger. Besides our site cats, there are a couple of kittehs that hang out on the premises, a gray and black striped tabby who is very skittish around humans, but gets along very well with Fred, and a very handsome un-neutered male cat which has become quite friendly and looks a lot like the beautiful Mrs Cat. The latter cat is in beautiful shape, he appears to be well fed and has a clean, sleek coat, but he hasn't been "altered" and he never wears a collar with tags. We can't figure out if this cat is a stray or a neighbor's pet- the evidence is conflicting.

One of the girls in the crew preparing our big fall fundraiser decided that she wants to take the cat home if he's still around when the event is "struck". She described the cat as "the perfect Halloween cat". Of course, she has competition- there's more than a few of us who want to take him on as a mouser. Needless to say, all is contingent on ascertaining that he doesn't belong to a neighbor, even a less-than-responsible one.

Because the cat spends quite a bit of time hanging around, a couple of us have taken to making up names for him. My co-worker **REDACTED** calls him "Panther", but I call him "Shadowcat", in tribute to a character from Dave Trampier's Wormy. Hmmm... somebody has put up the entire run of Wormy. My personal favorite strip is a glorious depiction of a "boat" trip to Toadtown, a particularly nice bit of fantasy art. If you're a fan of outré comics, you'd do well to check out the whole series.

Meanwhile, back in the real world, here is a picture of the handsome feller... a perfect Halloween cat, indeed! 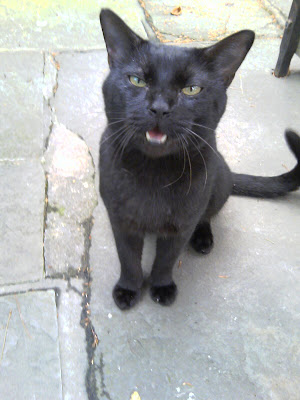 Posted by Big Bad Bald Bastard at 5:56 AM

he hasn't been "altered"

Enough of the euphemisms, BBBB. We are all grown up and you should call a spayed a spayed.

We are all grown up and you should call a spayed a spayed.

I sure served up a nice, slow pitch, and you knocked it out of the park.

He is a looker!

That's the general consensus, and that's not even a particularly good picture of him.

I live to serve! Tramp sure was a genius, wasn't he? Too bad he went nuts and disappeared. He was the 20th Century U.S.' answer to Albrecht Durer, and he gave it up to drive a cab in southern Illinois.

I once read a usenet post that said that he was living out of his car for the last few months that he was findable, and that he was suffering from depression and unemployed. It's a shame, he was a world class cartoonist. I wish someone would have paid him big bucks to draw everything in his head. He was easily as creative as Robert Crumb, and certainly a better artist.