Didja ever hear a song which sounds like an artifact of another decade, the product of a time-traveling pop group? Lately, I've been floored by the single "Rip Van Winkle" by Oakland's Shannon and the Clams. Here's a live version of the song, be sure to turn it up to eleven:

What's not to like? We have a rip(heh heh)roaring sound reminiscent of such 60's rockers as The Pleasure Seekers, from an album with a Lovecraftian title, inspired by a beloved "Old New York" story... I'm in bliss, pity the song only lasts two minutes fifteen seconds.

For the record, I am partial to the Arthur Rackham illustrated edition of "Rip Van Winkle". I've always been a fan of Arthur Rackham's work as an illustrator, he wonderfully blends the pretty and the grotesque, the mundane and the eldritch. Here's his take on young Rip's encounter with the Henry Hudson and his enchanted crew: 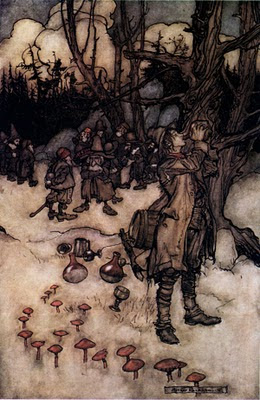 Rackham also illustrated an edition of "The Legend of Sleepy Hollow" and his creepy little imps almost upstage the big headless guy. Funny how the mind works, I start off with Shannon and the Clams, and end up with Arthur Rackham and the gnomes.

Posted by Big Bad Bald Bastard at 7:31 AM

Probably explains why that "booze" was so potent.