This weekend, the area is under a flash-flood advisory as the remnants of tropical storm Andrea move up the eastern seaboard. Just over two weeks ago, we had a fast moving thunderstorm that flooded the basement of my primary workplace. Today, though, the day shift worked their tailfeathers off, running an auger through the drain in the stairwells on one either side of the building and sandbagging the area downslope from my hastily-dug drainage trench... I actually took a photograph of the "problem area", but my phone reception here is crap, so the message to my e-mail never went through- I'll have to resend the picture later. A little preparation beforehand can do wonders when it comes to mitigating the effects of a storm. The last storm caught us blindsided, and the one guy typically onsite who was familiar with the operation of the pump happened to be working at another location... Murphy was an optimist.

Of course, I'm not out of the soup, but my relief will bear the brunt of the storm, which is supposed to peak here around 1AM (I'm a little nervous about flooded roads on the way home, because most of the local highways were built along watercourses, and are rendered impassible whenever there's a major rainfall). To compound an uncommonly rough worknight, the customers renting the site indicated that they will probably be here until 4 or 5AM, which (judging from a month's worth of experience) translates to 7AM. Their last day on site is tomorrow, so things will be peaceful and quiet soon.

UPDATE: This is the picture of the back of the building- you can see the two week old remnants of my hastily dug furrow, and the line of sandbags which was placed to keep water from flooding the basement: 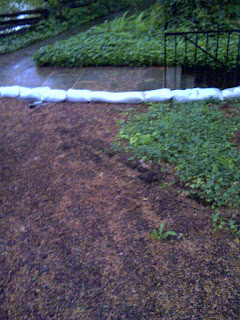 For the record, the basement remained as dry as a bone, even though we received a month's worth of rain over the course of the last twelve hours. At no time, though, was the rainfall as violent as it was during the brief thunderstorm two and a half weeks ago.

running an auger through the drain in the stairwells

The inaugeration of the pleasure-dome.

Somebody has to watch out for Mr. and Mrs. Toad, right?
~

One hopes they don't get carried away and run an auger through the customers.