With talk of duels hitting the airwaves, I decided to recall my own experience of single combat... on the pretext of a trumped-up "slight", I was challenged to a duel to the death with venomous plants serving as weapons. In order to obtain my weapon, I had to travel to the cacogens' quarter of the city, and cut the stalk of the plant. Why did I cut the stem of the plant instead of tearing it up by the roots? Had I been able to tear it up, I might have found things clinging to the roots against which not even my badness would prevail. The plant's roots are set in hell.

Once I obtained the plant, I had to learn how to employ it as a weapon. The thick stalk had protruding spikes, suggesting that the plant be employed the same fashion as a Godendag, while the roughly spherical nodules (known to exobotanical specialists as orbs) could be detached from the stalk and thrown at one's opponent- with any contact sure to be fatal due to their virulently toxic nature.

Since I am writing this entry, it's pretty obvious that I survived my duel, through a dint of good luck. Because I was preoccupied at the time, I could not take any photographs of the duel itself, but I did take a picture of the heinous alien plant which I employed in combat: 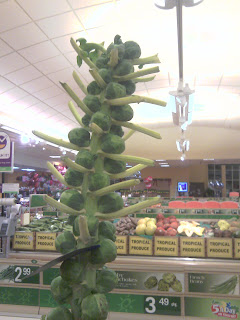 I seem to recall a similar recent post at an Antipodean blog, but was unable to find it... reading through several months worth of posts was hilarious, though. Cheers, chums!

UPDATE: I found the "Riddled" post I was alluding to- I was looking for "Martial Rose Library", but it was Winchester, England. Tricky Kiwis, how do they work?

Been reading Gene Wolfe, I see.

Gene's great- I can be relied upon to be the guy to reference Seven American Nights in a thread.

I've never had the good/bad fortune to be in a duel, but if it ever happens in the future, soundtrack will be from AMOK TIME.

Yeah, what's up with that? The post was within the last two months, no?

They sell those in the fall at the Union Square Greenmarket, BBBB.

The orbs taste much better when freshly plucked off the stalk.
~