This post is inspired by a couple of recent posts by others. 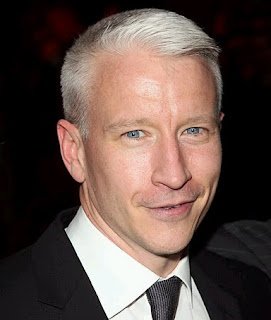 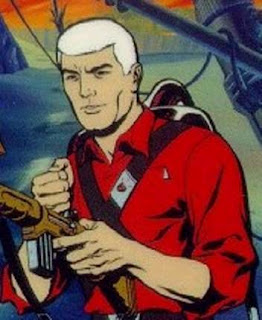 Another thing that Anderson Cooper and Race Bannon have in common is an ambiguous sexual identity. Not being a prude, I really don't care how these two "silver foxes" swing, but check out the looks that Race Bannon and Dr. Benton Quest exchange with each other in the Johnny Quest intro:

Once again, Warner Music Group demonstrates its sheer suckitude by disabling the audio track of the embedded video. The theme song, composed by Hoyt Curtain, is a stellar piece, and ranks high in the pantheon of television music.

Update: This guy beat me to the punch, and got a great pair of screencaps. Oddly enough, there are not a lot of search results for "Race Bannon" & "Anderson Cooper". Also, I am in a confessional mood, so I have to admit that I think that Secretary Sibellius has that "silver fox" thing going on.

I believe there is an episode of Harvey Birdman, Att'y.-at-Law that deals w/ the very issue of Race & the Doctor's relationship.

Confess indeed. You just like anyone w/ hair. (Though as a whitish-haired person who dates w/in his age cohort, I must admit Mme. Secretary is not unattractive. At all. )

Damn! Bouffant beat me to it! But you can view a clip from the Quest/Bannon custody trial episode here: http://video.adultswim.com/harvey-birdman-attorney-at-law/the-best-parent.html

I was looking for the Harvey Birdman clip to post, but did the episode have a "gay couple" vibe? Wikiwakiwoo doesn't pick up on it...

Especially considering that Race seems to have access to, and know how to handle, a small arsenal of firearms.

Yes, there was definitely a gay couple vibe to it. I wish they had the whole episode up; the clip I found was only of all the villains testifying about how Bannon did most of the primary parenting.

Oh, and, FWIW - my hair is solid white, though still masked with color. Been salt-n-pepper since around age 23; first one showed up when I was 13.

sigh...Anderson Cooper....sigh.
I'm with you, Jennifer, I was 17 when I spotted my first shiny white hair. Let's just say, blonde is a good camoflage.....