My Most Bitter Rival 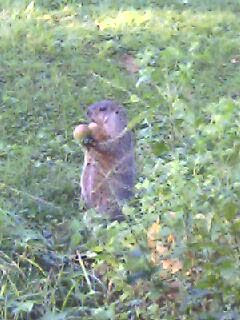 Being in a confessional mood, I have to admit that I have been living an extensive, though one-dimensional, life of crime. Well, a while back, I was in one of my usual haunts, when I discovered a marauding marmot muscling in on my scrumping-grounds. The cheeky devil was nicking the very apples that I was planning to steal! Oh the humanity rodenticity! The woodchuck scampered off before I could chuck it in a wood chipper, and I haven't seen it since. While some would propose a somewhat mundane reason for this absence, I suspect that the little sucker, after his last big score, jetted off to Brazil, where he's shacked up with a sleek agouti half his age.