Last night, I headed down to the scintillating Symphony Space on Manhattan's Upper West Side, to attend the latest Secret Science Club North lecture featuring Dr Mike Massimino, NASA astronaut and Columbia University professor of mechanical engineering. Dr Massimino's lecture was a recap of his career, which is the subject of his book Spaceman: An Astronaut's Unlikely Journey to Unlock the Secrets of the Universe.

Dr Massimino began his lecture by displaying the iconic picture of Buzz Aldrin walking on the moon: 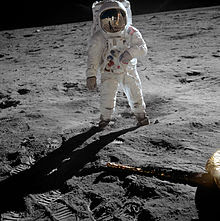 He noted that the only image of Neil Armstrong on the moon is the image reflected in Buzz Aldrin's faceplate, and joked that these astronauts weren't members of today's selfie-culture: "We're going to New Jersey, better take lots of pictures." He then told us that his first clear childhood memory was of the Apollo Eleven landing, which occurred when he was six years old. He showed us a picture of himself dressed up in an astronaut costume (repurposed from a school play elephant costume by his mother), carrying an 'Astronaut Snoopy' stuffed animal and dreaming of being an astronaut.

Dr Massimino then displayed a diurnal picture of New York City from a high altitude, pointing out the approximate locations of Symphony Space and Columbia University, then noting the location of his boyhood home in Long Island's Nassau County. He contrasted the diurnal view of the Earth from high up with the nocturnal view- at night, human habitations are easily distinguished by the amount of light they produce, while natural features of the landscape such as mountains and forests are distinguished during the daytime view. Dr Massimino has a flair for illustrating his curriculum vitae by displaying pictures of the planet- after graduating with a bachelor's degree from Columbia, he went to MIT for his masters, so he displayed this with a gorgeous NASA Earth Observatory picture of the Massachusetts coastline: 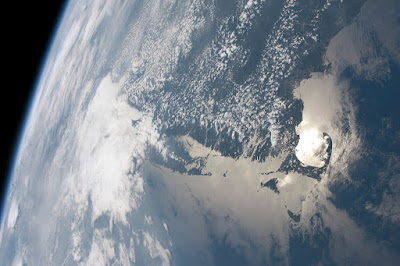 Dr Massimino detailed the long process by which he sought a career as an astronaut- deciding while working in NYC as an engineer to apply to NASA, but getting a rejection letter, then getting his masters and sending in another application. His third application was accepted and he became a member of Astronaut Group 16, along with identical twins Mark and Scott Kelly (Dr Massimino joked that the only way to tell them apart was by remembering which one was in space and which was on the planet).

The bulk of the lecture was a series of reminiscences accompanied by video footage. Dr Massimino noted that the orbiting shuttle would be plunged from bright daylight to utter darkness every forty-five minutes, and that the resultant drop in temperature could be felt even through the protection of the spacesuit he wore while space-walking. One particularly great tale involved a repair job the Hubble Space Telescope- while unfastening one of the Hubble's external handrails, he stripped the bolt, and a low-tech solution to the problem had to be put into effect:

Throughout the lecture, Dr Massimino conveyed his love for his job, his comrades, and his planet with humor and grace. He told us of looking down on the Earth and having such an emotional experience that he started tearing up, then he remembered that it was a bad idea to introduce water into the spacesuit, and he would have to make an accounting of this moisture, which would result in a new nickname. He displayed a picture of the Earth's atmosphere from space, noting how thin a layer it was, like an onion skin, a fragile one: 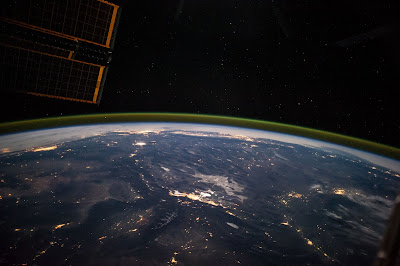 He joked about his infamous 'first tweet from space', and the ribbing he got on SNL about tweeting 'Launch Was Great', which made him a hit among his children's classmates. He also showed a funny video on how to make a burrito in zero gravity:

All told, the lecture was sweet, and Dr Massimino made an eloquent spokesman for space exploration. He recounted his last spacewalk, when he was finished with the task he had to perform, and the shuttle commander told him to take some time for himself to enjoy the view. This is a man who had attained his childhood goal, and performed important work, and was fully aware of how fortunate he was. He even showed us how one of the personal items he had taken with him on a mission was the Snoopy doll he had been carrying in his boyhood photo: 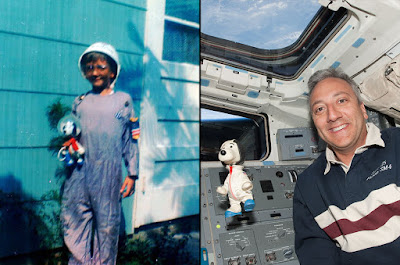 How could you not love the guy?

In the Q&A, Dr Massimino talked about the upcoming James Webb Space Telescope project, noting that it will be too far from Earth for astronauts to do repair work on (he noted that he was confident that NASA would figure out how to make any necessary repairs if something were to go wrong), and noting that the Hubble will still be in use, just like the Hubble didn't render obsolete earthbound observatories. Here's a great video of Dr Massimino reminiscing about his work on the Hubble:

Kudos to Dr Massimino, Margaret and Dorian, and the staff of the scintillating Symphony Space.

i've seen mike on tv on the science channel

now i am a retiree, aware that i am living in the future

or you could look at