Yesterday, I had a close encounter with a fledgling bird that was trying out its wings. The little thing took off when it saw me round a corner, but only flew a couple of feet before it perched and regarded me with a bright onyx eye: 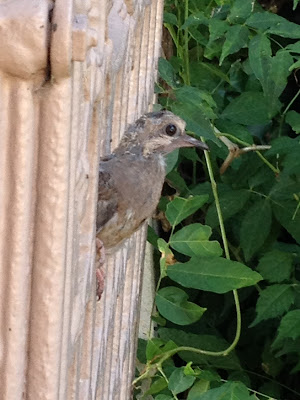 Judging from its size and the shape of its bill, I'd have to guess that it is a fledgling mourning dove (Zenaida macroura. If you aren't familiar with Aunt Snow's blog, it's named in honor of a mourning dove sighting. The doves are common around here, and they are lovely, shy creatures. On one memorable occasion, I got closer to one than I did yesterday- in fact, I grabbed an exhausted one which had gotten into a greenhouse at work so I could release it outdoors. Luckily, it was unhurt, and was able to fly off. Unluckily, I had my phone in the pocket corresponding to the hand with which I had grabbed the bird, so I couldn't take a photograph of it, a mistake which I made sure not to repeat.

Definitely! I'll have some good pix up this week. A lot of my "buddies" are wandering the site this weekend.

I've been bouncing between two sites, I'll see Fred and Ginger later tonight, but I'm down the road from them right now. We're kinda sorta understaffed at the moment.

Fabulous shot, what a cute bird. I really need to find myself a job where I can see birds and pick wild fruit :)

We have a resident pair of doves who come to feed beneath the bird feeder. They find plenty there to eat, since half the birds using my seed feeder dump all but their individual favorite things onto the ground!