Today we're having our second winter storm this week. I'm working the graveyard shift, and the snow started falling right around 1AM. Before I work the graveyard, I typically hit the supermarket to buy something for "lunch". Because of the bad weather forecast, there was a run on the supermarket which, hours later, had the manager still talking about the horror of it all. On a hunch, I took a stroll over to the dairy case, even though I have enough milk for my coffee for the week. Sure enough, this is the sight that greeted me: 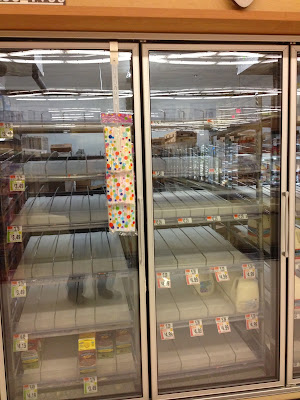 Last Friday, I stopped by a clothing store I frequent (it's a uniform supply place, I tend to wear Carhartt pants on the job) and the owner showed me this topical video:

It happens every time the forecast is a little hinky, and the forecast by me is for anywhere from three to six inches, with six to ten forecast for the area in which I work. I'll be okay, the new car is good in the snow- it's a stick shift, front wheel drive, and I keep a small coal shovel in the back of it. I'll probably stick around the workplace for an hour or two to let the plows work and to let the rush hour subside.

Now, the real question is, what the hell are people doing with all that bread and milk? It's not like you can make a milk sandwich!

Posted by Big Bad Bald Bastard at 3:32 AM

Did he get the friggin bread and milk?

Now, the real question is, what the hell are people doing with all that bread and milk? It's not like you can make a milk sandwich!

It's all those damn milktoast liberals.

Did he get the friggin bread and milk?

You'll have to wait for the sequel!

It's all those damn milktoast liberals.

They're adulterating our precious bodily fluids!

Last winter, I went through a strata phase.

"Last winter, I went through a strata phase."

But, but, that requires eggses!

But I like "milktoast liberals" as a possibility, too!