Last night, I headed down to the scintillating Symphony Space, on Manhattan's Upper West Side, for a Secret Science Club North lecture featuring Dr (and naval Captain) Kathryn Sullivan. Dr Sullivan is the first American woman to walk in space, and was instrumental in the mission which placed the Hubble Space Telescope in orbit. She has just released a book, Handprints on Hubble: An Astronaut's Story of Invention.

Dr Sullivan started her lecture with a passage from her book that came across as a passage from a techno-thriller, describing sitting in the shuttle, on the launchpad when an indicator light came on, showing a possible fuel leak. As she sat in the shuttle, a propulsion operator, known to her only by the callsign MPS, had to determine whether it was an actual leak or a faulty indicator, and whether to manually override the stoppage of the countdown clock- spoiler, the launch proceeded. It was a nice, sorta tense beginning to the lecture, an appetizer for the narrative that followed.

Captain Sullivan began her career as an astronaut in 1978, when NASA selected its first space shuttle crews. She had just received her PhD in geology, and was seeking her first post-doctorate job. The initial shuttle crews were, as she described them, TFNGs- thirty-five new guys (with the 'F' having another meaning not fit for the Symphony Space stage). Six of the Class of '78 were women, three were African-American men, and one was an Asian-American man. She joked that they were 'ten interesting people and twenty-five standard white guys'. As a 'baby astronaut', she had to go back to school for intensive classwork in physics, physiology, and other necessary subjects, receiving the equivalent of a first year graduate coursework in these fields. Before being considered as a crew member, she had to help prepare other flights- she compared this to starting work in the mailroom of a company and rotating around to other positions in order to learn what she needed for spaceflight.

Dr Sullivan's first spaceflight was in October 1984. Prior to that, her classmate Sally Ride flew in June 1983. Sally Ride flew with Dr Sullivan on her first flight, when she became the first American woman to walk in space. Dr Sullivan, a magnanimous person, noted that Russian cosmonaut Svetlana Savitskaya was the first woman to make two spaceflights and the first woman to walk in space. Dr Sullivan joked that her first mission allowed her to do 'cool earth-science things', and to test tools that would be needed for refueling satellites in orbit, thereby increasing their lifespan.

She also displayed an iconic photograph of her with Sally Ride, and related a funny anecdote... the two wee in the 'White Room' outside the shuttle launchpad, and they both knew that they were the recipients of media attention. In order to look like they were doing something, they decided to play out a stereotype from all sorts of military movies and tech thrillers, and pretended to synchronize their watches (which had already been done long before): 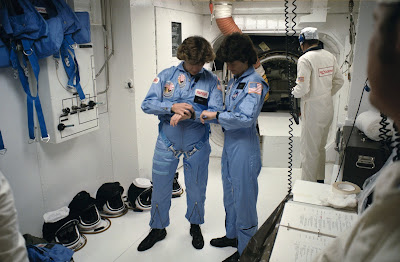 She quipped that astronauts are on top of the world before a flight, receiving a lot of attention, but when they land, they go back to being nobodies, having to seek themselves out in photographs.

After her spacewalk, Dr Sullivan was placed on the 'space telescope' project which would result in Hubble. The space telescope was supposed to be maintained for fifteen years, but no tools were developed with which to work on the device. One of her earliest tasks was to figure out what tools were needed for maintenance. She displayed a painting by Chesley Bonestell from a 1952 issue of Colliers magazine (published shortly after her birth) depicting a space shuttle, a space telescope, and a space station: 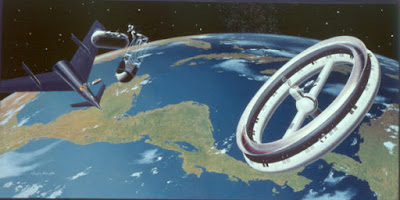 Her work would be making this image a reality... to make the engineering catch up with the vision. She noted that we have accomplished this, though the details were slightly different, with different shuttle wing configurations and an Erector Set space station instead of that 'Arthur C. Clarke hub-and-spokes space station'.

The space telescope being conceived shortly before her birth, she jokingly referred to Hubble as her 'big brother'. The telescope was designed to be worked on by space-suited astronauts. Dr Sullivan humorously likened this to putting on two snowmobile suits, placing a bucket on one's head, donning clumsy gloves, and trying to change the spark plugs in one's car... oh, and if you drop a tool, it floats away. Special tools needed to be devised, and the work choreography had to be figured out in a water tank. Dozens of tests were needed to develop good bench strength to work on the Hubble telescope. The original plan was to have large instruments worked on in orbit, but to perhaps bring the telescope back to Earth every five years to repair smaller electronics... this idea was scrapped in 1984, and everything had to be modified to allow repairs to take place in orbit.

Dr Sullivan then walked us through the necessary tasks to work on equipment in orbit. In order to hold one's feet still, a portable foot restraint is needed, a pivoting platform attached to the object to be worked on by a semi-rigid tether... all while the object to be worked on is restrained by the shuttle's robotic arm. Even the pliers and ratchet sets to be used in orbit have to be modified so they can be used while wearing heavy, clumsy gloves.

Before the Hubble mission, the crew ordered a bunch of mission patches, and enamel badges for the launch team, which were misprinted 'Lunch Team' and instantly became highly sought-after collectors' items.

In April 1990, the Hubble was released into orbit with a hitch- one of the solar arrays was stuck, so Dr Sullivan had to suit up and spend time cooped up in an airlock in case she had to manually crank the array into place. A technician on the ground was able to properly deploy the solar array, so Captain Sullivan never had to leave the airlock.

When Hubble was deployed, it was found to be 'nearsighted'- there was an imperfection in the main mirror, one-fiftieth of the thickness of a human hair. Arthur Fisher writing for Popular Science put it: “It was as if an eagle had become a bat.” The mess-up was a severe blow for NASA, but the Hubble team figured out that the error was precisely calibrated, and could be corrected by a similarly calibrated adjustment of the optical works. The correction, dubbed COSTAR, was envisioned by engineer Jim Crocker... Crocker, a tall individual, hit upon a solution while loosening an adjustable showerhead in an Utrecht hotel room, and realized that a corrective optical device could be added to Hubble. The repair took place in 1993, and the gorgeous images obtained by Hubble afterwards have become iconic.

The Hubble telescope has entered the public imagination like no other scientific instrument. It has been improved throughout its lifetime, which has been much longer than its projected fifteen year term. Dr Captain Sullivan finished her lecture by displaying a photograph of the actual handprints on the surface of the Hubble which inspired the title of her book, sections of the telescope's surface which, due to contact, have been weathered by interactions with particles in space. Being a magnanimous person, she noted that the ground crews which have participated in the Hubble mission have left metaphorical handprints as well.

The lecture was followed up with a Q&A session. I am happy to note that there were several families with children present for the lecture... it's beautiful to see the values embodied by Dr Sullivan and the Secret Science Club team instilled in kids. One of the first questions was, were you ever scared while on a mission? Dr Sullivan joked that astronauts ride bombs for a living, but that the risk is totally worth it, and that as an astronaut, she had to be 'all in' on every mission. Regarding a question about the scientific benefits of space programs, Dr Sullivan noted that the Apollo program marked the first time that computer scientists stopped bragging about how big their computers were and started bragging about how small their computers were (I was reminded of this). Another question regarded the effects of space flight on her body- after ten days in orbit, her body felt like wet sand, and she had to remind herself that she couldn't just 'launch' objects to other people because of the gravity. Another question regarded looking down on the Earth, and Dr Sullivan noted that most boundaries cannot be seen from space, but certain divisions are visible due to human effects on the terrain. When asked if she experienced sexism in NASA, she noted that she walked on as a full astronaut, and that NASA had been attempting to make a 'one size fits all' spacesuit, a sort of modular 'Mr Potato Head' design that could be adjusted to fit a broad range of physiques. Asked what inspired her to transition from Marine Geology to Spaceflight, she said that she wanted to see the Earth with her own eyes. Asked if the view of the stars from space was different than from Earth, Dr Sullivan joked that the differene in distance from the ground is negligible, but that the view of the Earth from orbit is dramatic- Earth isn't Carl Sagan's 'pale blue dot', but a 'big blue beachball'. Some Bastard in the audience asked her to contrast her career in NASA with her career with NOAA, particularly with regard to politics- she noted that NASA is seen as a bipartisan gem, with a unified space law formulated in 1958 with the administration's creation, and defining its mission. NOAA, formed in 1970, aggregated bits and pieces of many agencies, some such as the Weather Bureau and the Department of the Fisheries dating back to the 1800s. It was created to synthesize a 'big picture' from various oceanographic and atmospheric sources. If NASA is a gem, NOAA is a quilt, and its efforts have to be more convincing to more people in order to ensure proper funding.

Dr Sullivan delivered a fantastic lecture, a blend of hard science and engineering, with a fascinating career retrospective, and a bold adventure narrative... all of it leavened with humor, and heartfelt expressions of gratitude to her colleagues. I often talk about the 'Secret Science Sweet Spot', and Dr Sullivan achieved it. Grand Slam? She knocked it into orbit. Kudos to Dr Sullivan, Dorian and Margaret, and the staff of the scintillating Symphony Space.

For a taste of that Secret Science Club experience, here is a video of Dr Sullivan speaking on her career with NASA:

Last night, I learned that the two latest Secret Science Club North lectures were recorded for C-SPAN Book TV. Last night's lecture should be broadcast in three weeks or so. I will post the last SSCN lecture's C-SPAN recording in another blog entry, so you can get the full experience.

Are you tired of being human, having talented brain turning to a vampire in a good posture in ten minutes, Do you want to have power and influence over others, To be charming and desirable, To have wealth, health, without delaying in a good human posture and becoming an immortal? If yes, these your chance. It's a world of vampire where life get easier,We have made so many persons vampires and have turned them rich, You will assured long life and prosperity, You shall be made to be very sensitive to mental alertness, Stronger and also very fast, You will not be restricted to walking at night only even at the very middle of broad day light you will be made to walk, This is an opportunity to have the human vampire virus to perform in a good posture. If you are interested contact us on Vampirelord7878@gmail.com