Once again, it's snowing here in the NY Metro area. We're expected to get anywhere from one to six inches of snow, dependent on one's proximity to the coast. Already, the accumulated snow is knee high. At least the fresh snow is covering up the gray, sooty piles of snow by the sides of the roads. As always, the workplace looks gorgeous: 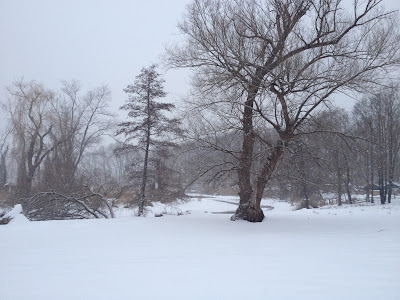 With all of the thawing and freezing, there are some large icicles onsite- this one is almost two feet long: 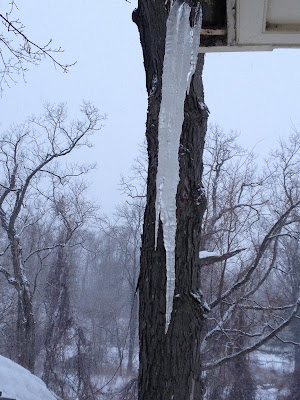 The snow on site has accumulated to knee-depth in general, with higher drifts: 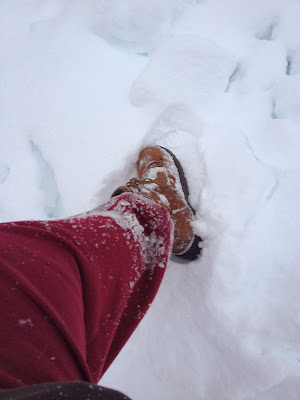 Of course, some of my coworkers aren't very keen on the snow, much preferring a perch atop a radiator cover: 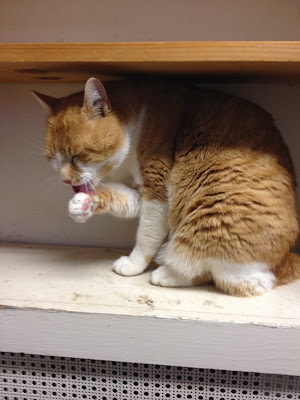 Some are even desperate enough to squeeze into a tight spot between a radiator cover and a counter: 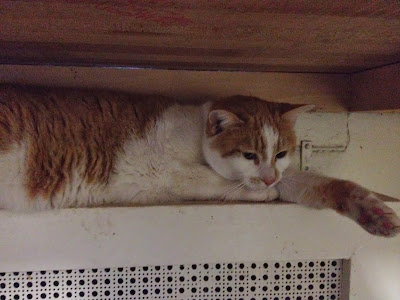 I'll probably cool my heels at my workplace until the rush hour traffic subsides, having an aversion to driving among knuckleheads who don't clean their cars off thoroughly and don't know how to drive properly in adverse conditions. My new car handles really well in the snow- I haven't even had problems getting into and out of parking spots. There is quite an accumulation of snow in my typical parking spot, but stick shift makes parking easy- I get up a nice "head of steam" while the car is in second gear, and "hop" atop the snow pile. On a couple of occasions, I've had to do some digging in order to exit my spot... I always keep a small coal shovel in the back of the car for this purpose. It's a lot easier to dig with a nice steel shovel than with a big plastic thing that's meant to push the snow around like a miniature snowplow.

Posted by Big Bad Bald Bastard at 8:24 AM

I saw on a teevee comercial that you can use the old fashioned clay-type kitty litter to gain traction without all that pesky shoveling.

Of course, it's sixty five degrees and sunny again here, so what do I know?

That Iceicle looks like something out of a horror film

Hurray for cats! We used to have radiator covers just like that. But with different cats sleeping on them.
~