Limoncello is a typical liqueur from Southern Italy- the centers of Limoncello production are centered around the Gulf of Naples and the Gulf of Salerno. Best served chilled, limoncello is a perfect after-dinner digestivo- though I would never criticize anyone for drinking it before, or during dinner, or on a lazy summer afternoon, or to chase away a winter chill, or... sorry, I was distracted by the prospect of a nice, chilled glass of limoncello.

While limoncello recipes are plentiful on the internet, here's my personal method for making it. First, thorougly wash, then peel fifteen or sixteen lemons (depending on the size of the lemons, and whether the market is selling them in lots of three or lots of four) with a vegetable peeler, making sure you are not getting any of the white pith (which will make your limoncello bitter). Place the lemon peels in a clean gallon jar and pour a gallon of pure grain alcohol (I have to drive to Connecticut to obtain the stuff) over the lemon peels, and cover. Let the mixture sit for at least a week (I leave the jar in a dark, cool corner for three weeks), then prepare a simple syrup by heating two pounds of sugar with a quart of water, and simmering until the mixture is slightly thickened. Strain the lemon peels out of the alcohol, and add the syrup to the infused alcohol (I use a couple of one-gallon pitchers for this stage of the production). Dilute the resultant syrup/alcohol mixture with water until the desired strength is reached (I use a 50/50 ratio, making the resultant liqueur about as strong as a typical vodka). Strain again, and bottle the stuff. Keep away from small children and open flames. A few hours before serving, place the bottle in the freezer to chill. If necessary, dilute individual servings to taste... the stuff is strong.

Here's a still life which incorporates the ingredients of this delicious treat. Look at that forlorn lemon, which has been robbed of its golden integument. Also, note that the contents of the gallon jar, with an alcohol content around 95%, have a clear golden color, while the glass of limoncello in the center has a milky translucency. This is the same effect one sees when one mixes water with absinthe- as the percentage of alcohol decreases, the oil from the lemon peels forms a microemulsion in the glass: 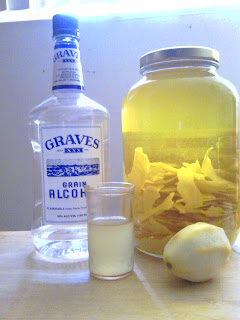 Yeah, that's a gallon of pure alcohol in the jar... WOOHOO!

I'd be leery of the raw egg whites here in the U.S.

*sigh* We used to have high standards... now people get sick eating here in the States- Reagan's Revenge?

One of these days, I'll use multiple citrus peels, make a Five-Alive-ello.

Egg whites are just to make it a little frothy. Holds up fine w/o them. But if Peruvians are brave enough, so must I be...

As long as your eggs are from a reputable source... also, the alcohol and citric acid would kill any salmonella pathogens.

I got a little bottle of Neuchâtel's best lying around the house.

I think I taste the anise-y flavor of a future blog post.

That looks pretty tasty. I'm trying to avoid too much sugar, though.
~

Is there a recipe for a limonviola-d'amore? AFAF.

New Zealand breweries have been known to dispose of duff batches of lager by bottling it with a chilli in each bottle and a Mexican-themed label and calling it "Chilli Beer". Sticking a crucifix in each bottle would be a novel alternative (and cheaper than barrel-aging).

Sticking a strip of godmeat in each one... not so easy.

LOVE limoncello.
What time should I be there?!?

What time should I be there?!?

Any time at all- this time of year, I always leave a window open.

that's how the zombies get in.

The fresh goodness of Lemons an' alcohol would drive the Zombies away.
Partial to a drop of Lemoncello meself but it's kinda strong

The fresh goodness of Lemons an' alcohol would drive the Zombies away.

You OBVIOUSLY are not aware of all zombie traditions where alcohol is concerned.

OK - why not come out here to Topanga and make this from the lemons from my tree? And if you need egg white, my neighbor's chickens are laying.

That would banish the Zombies - or at least, let them enjoy the party.