Since I posted on Canadian Flag Day, I figured that I'd have to write about the United States' Flag Day. Flag Day was established in 1916 by Woodrow Wilson, perhaps this was an effort to boost patriotism during the World War One era. At any rate, I have to confess that, even as a 'Murka hating liberal socialist, I find the American Flag to be a brilliant bit of graphic design... it's visually striking and brilliantly symbolizes the nation that it represents... well done, Betsy Ross, your visual genius has rarely been matched.

I always have a couple of small American flags in the apartment. I tend to find them on the side of the road while biking, or while walking in cemeteries where they have been dislodged from graves. Yeah, I like to visit cemeteries occasionally (and we have some beauties in the NY Metro Area). Here's a picture of Washington Irving's grave, festooned with an American flag: 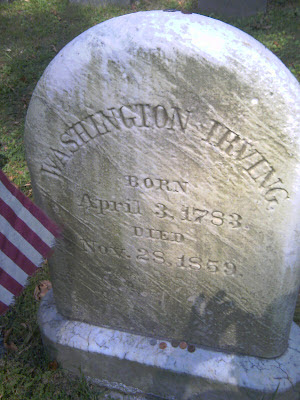 Anyway, I like to rescue these forlorn, lost flags. I'm usually suspicious of overly patriotic displays, because I agree with Samuel Johnson's adage: "Patriotism is the last refuge of a scoundrel." That being said, the flag itself is pretty damn sharp, and I think that it should be reclaimed from chauvinistic false patriots (those who claim to love America but hat Americans)... those assholes have their own flag. They have also adopted a flag which perfectly encapsulates their ethos, a depiction of a scared, yet dangerous animal, laden with venom and loudly shrilling it's fear of being stomped on by an ill-defined, threatening figure. How about a saucy little tribute, performed by a leggy, multi-talented ukulele goddess?

Sorry Jimmy, it's not that I don't love ya and all, but you don't have a set of gams like that.

Not just anybody could do all that!!

Happy Flag Day to all my Americano friends. ;)
Your flag is indeed lovely. Very bold in colour and design.

I have to admit, whenever I see the word, "Murka" I always think of a youtube video Thunder put up awhile back.
Thunder, you remember? My all time favourite youtube video? :)

The end of this page has some of my favourite flag usage.

I think I need another hint, Laura.
~

The flag display at the Smithsonian is pretty great. I love the way it's lighted.

And the flag itself is very grand and humble at the same time.

Not just anybody could do all that!!

I'm sure you could give it a go!

Happy Flag Day to all my Americano friends. ;)
Your flag is indeed lovely. Very bold in colour and design.

I don't get that vibe, I think her performance is tongue in cheek, I get more of a "sassy, brassy broad" vibe from her, a la Rusty Warren.

The end of this page has some of my favourite flag usage.

I'm hearing that line in Dylan's voice, and it's pretty damn funny.

I think I need another hint, Laura.

You're gonna have to buy a vowel!

The flag display at the Smithsonian is pretty great. I love the way it's lighted.

And the flag itself is very grand and humble at the same time.

It's been a while since I've visited D.C.